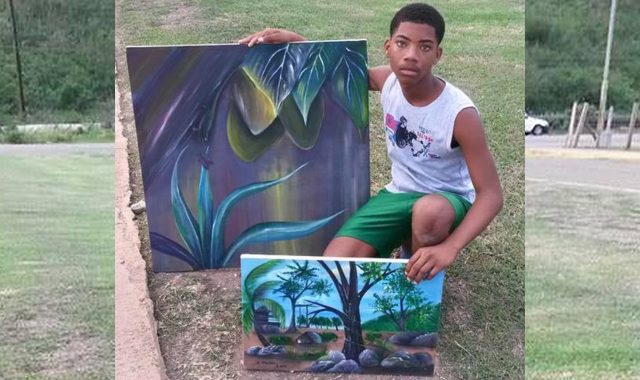 Parker, who’s from Corn Piece, Clarendon, Jamaica, completed two paintings last year with the intention to sell them. The young artist took the paintings JAMALCO’s main gate (Alumina Plant) after complying with his mother’s advice not to dispose of his artwork.

Parker later became an overnight sensation after someone took this picture of his simple exhibition at the bauxite company gate and posted it online.

“Yes, I am surprised, because I didn’t expect this response. I just went to the company (Jamalco) to hold up the two paintings because Mommy said I should not sell them. And next thing you know, I am a big deal,” Parker told Rural Xpress.

Parker’s mother, Elfreda Dyer, a single parent who operates a grocery in the Hayes area of Vere, Clarendon, said, since her son’s overnight success, he has become somewhat of a community hero with well-wishers locally and overseas making offers to help in his artistic development.