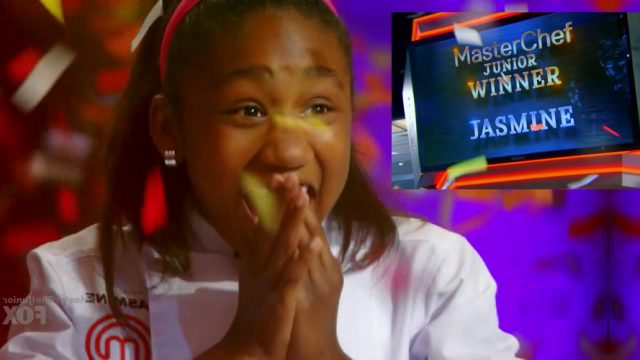 Jasmine Stewart won the MasterChef Junior trophy as well as a $100,000 grand prize as she was crowned the new MasterChef Junior champion Thursday night on the Fox network in a two-hour-long finale. Watch her journey and then the winning moment in the videos below.

12-year-old Jasmine, who said she draws inspiration from her parents, stuck to her Jamaican roots and stunned four judges, including celebrity chef Gordon Ramsey. “This is the biggest moment of my entire life. Who would ever think a little girl from Milton, Georgia, would ever win MasterChef Junior?” said Jasmine, the Season Five winner, moments after winning the final round of competition. “Who knew I was going to even make it onto the show, let alone the top 4.”

The show kicked off on February 9 and Jasmine’s journey was nothing but remarkable. She made her way from ‘Top 40’ to ‘Top 20’ to ‘Top 12’ before being eliminated after a baking challenge, but she cooked her way back into the competition into the ‘Top 6’ after winning a game-changing ‘comeback’ challenge.

The FOX series, hosted by Gordon Ramsay British star chef of “Hell’s Kitchen” and renowned pastry chef Christina Tosi, give kids that chance to showcase their culinary skills and passion for food in a series of challenges varying in difficulty.

“Some of the highlights of the show was winning of course,” Jasmine told The Atlanta Journal-Constitution in an interview.

Tasked with creating a “finale worthy three-course meal,” which would be judged not only by Ramsay and Tosi, but also renowned chef Wolfgang Puck and Martha Stewart, Jasmine channelled her Jamaican roots to create a crispy, white fish and scallop fritter appetiser served with a red pepper peanut sauce and jerk spiced green papaya salad.

Why We Need to Stop Eating Parrot Fish

Breadfruit is High in Protein and Could Feed The World

Jamaican Seafood Dishes You Must Have