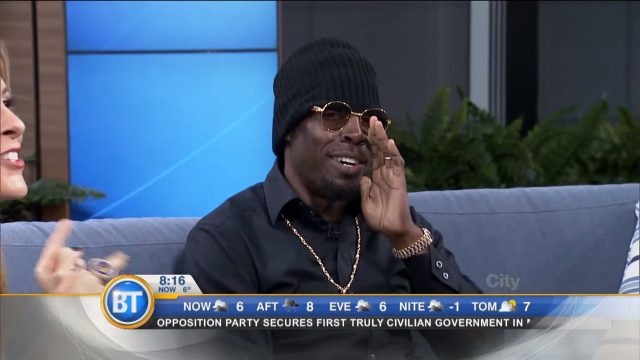 Shabba Ranks, the first Dancehall artiste to win a Grammy in 1991, was in Toronto, Canada for the his show at the Sound Academy on Friday night. The ‘Dancehall Emperor’ — born Rexton Rawlston Fernando Gordon — sat down with Tv Host Dina Pugliese on the Breakfast Television Friday morning to talk about his success, music and more. Mid interview, Pugliese couldn’t help herself and kicked off what would become a duet by the two, of Shabba Ranks’ 1988 mega hit “Twice My Age” which featured Crystal.

The Dancehall legend, who was also one of the first Jamaican deejays to gain worldwide acceptance, and recognition for his ‘slack’ lyrics, won two Grammy Awards for previous work, and Epic went on to release a ‘Greatest Hits’ album, entitled Shabba Ranks and Friends in 1999.

Shabba’s biggest hit single outside of Jamaica was the reggae fusion smash “Mr. Loverman” (memorable for bringing the cry “Shabba!” to the music world). Other tracks include “Respect”, “Pirates Anthem”, “Trailer Load A Girls“, “Wicked inna Bed“, “Caan Dun“, and “Ting A Ling“. Watch the full interview below.