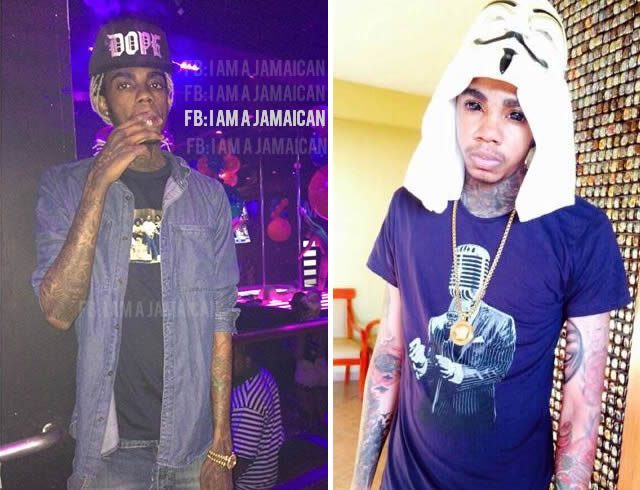 Controversial Dancehall Alkaline has revealed that he lied about tattooing his eyes; he has been sporting Black Scleral contact lenses. The artiste shared the photo above with his 106K followers on Instagram while he celebrated his 22nd birthday on Saturday night that shows his white sclera — not his signature full black eyeballs. This real thing is completely irreversible.

The 22-year-old Ardenne High alumnus, who refuses to admit that he is influenced by Dancehall legend Vybz Kartel, convinced many of his fans that he had tattooed his eyes. “I really tattooed my eyes; it’s a fresh look for Dancehall… It did hurt, but pain is temporary,” Alkaline, real name Earlon Bartley, declared during an interview on national television in 2013. Watch below.

Following the interview, many fans and artiste within the Dancehall community blasted the new artiste saying his image and lyrics are not suitable for the dancehall culture. But Alkaline says his music represents everything that society is afraid of, and society represents everything that he is afraid of. He reiterated that his style is not that of a typical artist, but ‘urban edgy’ with a twist hardcore appeal.

In August 2015, Kranical, upcoming artiste and a former close friend of Alkaline, exposed the deejay during an interview on Television Jamaica, saying he was the one who asked his mother to purchased the US$475 contact lenses for Alkaline.

Since his breakout singles, ‘Things Mi Love’ followed by ‘1-2-3’ allegedly co-written by Kranical, Alkaline has released many popular tracks ‘Live Life,’ ‘Move Mountains,’ ‘Fleek,’ ‘Gyal Bruk Out,’ among others. The “Champion Boy” deejay has been signaling that he’s has something compelling to reveal come 2016.