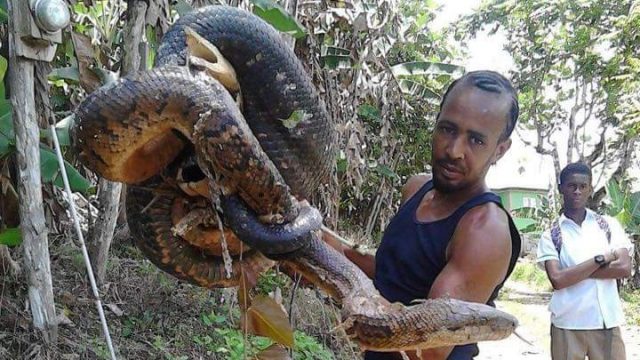 A huge snake was found in a banana field in Garlands, in the hills near to Maroon Town, St. James yesterday. In the picture uploaded to Facebook, the Jamaican Yellow Boa appears to be shedding.

It is quite rare to discover a really big snake in Jamaica. A 7-foot Yellow Boa was found in Black Rock, Portland last year.

There are seven species of snakes on the island which are indigenous to Jamaica, and none of them are venomous. The Yellow Boa is the largest of all snake species found on the island. It is an endangered animal and is protected under the Wildlife Protection Act. Their population has declined rapidly due to habitat destruction, hunting by mongoose, dogs and cats and unprovoked killings by people.

The Yellow Boa, like all Jamaican snakes, lives in trees and warms up on rocks in the morning. It is active at night and eats lizards, birds, frogs, and rats. Snakes shed their skin to allow for further growth and to remove parasites that may have attached to their old skin. As a snake grows, its skin becomes stretched.

The fact that snakes can shed their skin has always fascinated those with a curious mind, especially children. There is just something about an animal that can slide out of its skin once or twice a month that fires the imagination.

It is illegal to harm, capture, kill or have a Jamaican boa in one’s possession. Persons found in possession of or any by-product of the Jamaican yellow snake, can be prosecuted under the Wild Life Protection Act and can be imprisoned for up to 12 months or fined $100,000.