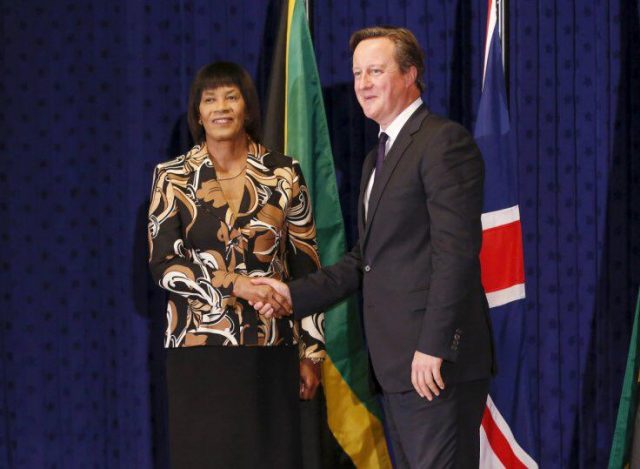 On Tuesday, Prime Minister David Cameron, the first British prime minister to visit the island in 14 years, announced a £25m deal to build a prison in Jamaica so that 300 incarcerated Jamaicans, currently in the UK, can be sent home to serve sentences on the island. Immediately after the news Jamaicans, irritated and outraged, took to social media to condemn the deal and PM Portia Simpson. Jamaicans described the deal as a slap in the face following calls for reparations from UK.

This is not the first time the UK approached Jamaica with a transfer agreement. In 2014, the Daily Mail reported in that the Ministry of Justice in the United Kingdom had made repeated attempts at trying to persuade successive Jamaican governments to allow more than 737 prisoners at the time to be returned to the island to serve sentences for crimes committed in the UK. Though voluntary agreement to allow prisoner transfers was signed in 2007, seven years later it was still not been ratified by the Jamaican parliament.

Fast Forward to 2015: UK to contributes £25-m to build a prison in Jamaica

On Tuesday, BBC News reported that UK is contributing about 40%, or £25 million, of the cost of building the planned jail, which would hold 1,500 to 2000 people.

On Wednesday morning, The Ministry of National Security issued a release outlining the £25 million deal.

The signed non-binding Memorandum of Understanding (MOU) states that the UK will contribute an additional £5.5 million towards the reintegration and resettlement of prisoners. Clearly, Jamaican taxpayers will have to foot the balance of the funding — roughly $6 billion Jamaican dollars.  The Jamaican Prime Minister has yet to explain why she has accepted such a deal, or how her administration plan on maintaining the planned prison house. What ultimatum did PM Cameron give her? Even if the UK to provide the full economic cost for the construction of this facility, the maintenance cost would still be exorbitant.

“Provision would be made for up to three hundred Jamaicans serving prison sentences in the UK, and subject to deportation at the end of their sentences, to be transferred to this new prison to complete their sentences” the release read.

Deportee Prison: #UK #Jamaica will divert scarce funds to finance/maintain a prison for violent/drug offenders who’ve lived in the UK.

Key features of the MOU, as outlined by the National Security Ministry

Some important elements of the MOU are:

There are substantial benefits that would accrue to Jamaica:

If this move will save UK taxpayers £10 million per year as reported — which is the aim —  how much do you think it will cost us, a struggling country whose total debt as of March 31, 2015 stood at J$1.85 trillion?

Jamaicans are to serve the full extent of their sentences there for whatever crimes they committed in the UK. We consider it the responsibility of the UK authorities to pay for their imprisonment. Currently, more than 600 Jamaican nationals are in UK jails but cannot be deported because of Jamaica’s poor prison conditions. Jamaicans make up the third largest number of foreign nationals in UK jails, after Polish and Irish.

It’s worth noting: last month, National Security Minister Peter Bunting announced that the Government was looking to build a new maximum-security facility in the next three to five years that could cost $10 billion to accommodate between 1,500 and 2,000 prisoners.