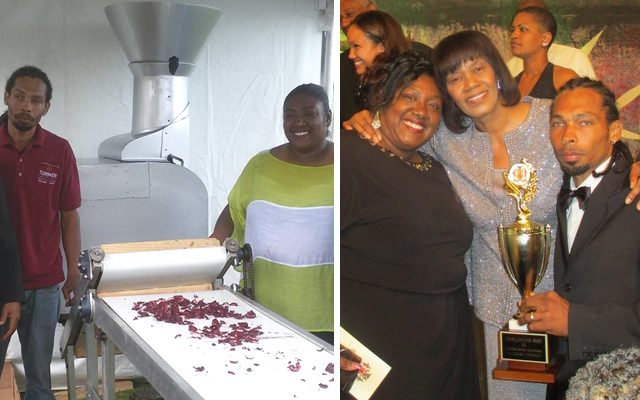 A Jamaican couple has invented a Sorrel Harvesting Machine, which could significantly boost local production. The St Elizabeth farmers and entrepreneurs, Oral and Allison Turner, won a national award for their invention.

This is the first machine in the world to facilitate the mechanical stripping of the difficult-to-remove ‘red caylics’ from the sorrel and already, on average, it has reduced labour costs by up to 90 per cent and has increased harvesting capacity by up to 100 per cent. View demonstration below.

The de-seeding of sorrel will reduce, by at least 50 per cent, the time required by manual labour and will reduce manpower from 10 to one labourer per session. This will increase the opportunity local farmers to compete globally on the sorrel market.

The Sorrel – a species of Hibiscus native to West Africa – has long been a popular plant for agricultural producers in Jamaica, yet its harvest has traditionally been a tedious, time consuming and expensive.

A prototype was presented to the Ministry of Agriculture and Fisheries in 2011, which then made a submission to the Development Bank of Jamaica (DBJ) for assistance in developing the technology and putting it on the market.

Mrs Turner enrolled in business development at the Branson Centre of Entrepreneurship in Jamaica. After that training, they were able to launch their company Turner Innovations and were successful in convincing a network of investors called First Angels to sponsor the continued refining and upgrading of their invention.

The machine was later developed in 2013 and patented. Backed by grant funding and private investors, the company launched a food-grade higher yield model of the machine in October 2014 and began taking orders for delivery in 2015.

The brand new Sorrel Harvesting Machine was launch on October 27, 2015 at the Ministry of Agriculture and Fisheries headquarters in St. Andrew. This will revolutionize the sorrel industry as we know it. The one-of-a-kind machine feeds picked sorrel buds into the funnel-shaped invention to tear the calyx away from the seed, separating the two.

This groundbreaking invention will improve the lives of farmers and agricultural producers, and increase the production capacity and output of sorrel, a plant known for its medicinal value.

The inventors won the Innovation Award in the Agriculture, Food and Agro Processing Category at the 2014 National Medal for Science, Technology and Innovation Awards Ceremony.

“I am creating wealth opportunity to the farming community, building my county’s ability to look after itself, and creating employment. Sorrel farmers can now plant bigger crops, consider larger contracts and be more competitive in the global marketplace,” says Allison.

To use the machine, farmers will be required to pay a 50 per cent deposit through a bank account that will be provided. The machine will then be transported to the farm to harvest the crop at which time the balance is to be paid. The machine is operated by one person with the capacity to process 2,000 pounds of sorrel per day.