I AM A JAMAICAN
Home News If You Vote PNP You Are Among the Mentally Enslaved. Here’s Why 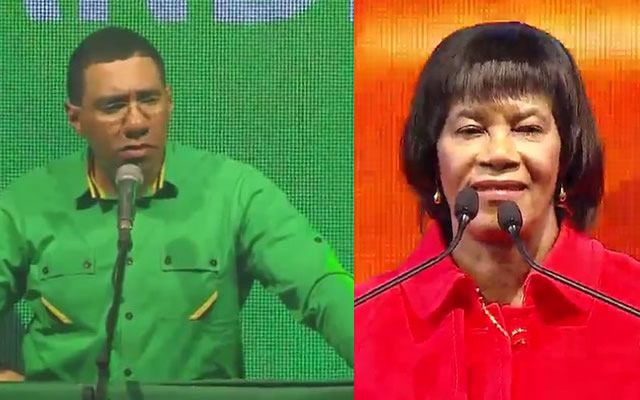 Non-partisan view: After two weeks of back and forth, finger-pointing, lawsuit-threatening, and the demanding of an apology from the Jamaica Labour Party (JLP) Leader Andrew Holness, the People National Party (PNP) has informed the Chairman of the Jamaica Debates Commission (JDC) Noel daCosta on Wednesday that they will not participate in the national debates “at any level whatsoever.”

In a letter to the JDC’s Chairman, the PNP’s General Secretary Paul Burke explained that having given Jamaica Labour Party Leader Andrew Holness “more than adequate time and opportunity” to address issues that were conditions for the PNP’s involvement in the national debates, the “PNP has no other option but to stand by its original position.” The party’s general secretary also added, “we will not compromise our principles.”

The first set of the proposed dates were February 16, 18, and 20. But the PNP’s General Secretary Paul Burke said unless Holness took certain actions, which were communicated to him by Portia Simpson Miller’s attorney on February 6, the party would not engage in a debate. Burke also suggested that the format of the leadership debate be changed to one similar to recent town hall-type debates conducted by the Democratic Party candidates in the United States.

However, the JDC said it did not have neither the time nor resources to host such a debate and proposed new dates the following week: Friday, February 19; Saturday, February 20, and Sunday, February 21. At no point should politicians be allowed to veto a national debate or a political party dedicate to the Jamaica Debates Commission the format of said debate.

The General Secretary also cited yesterday’s statement that “based on the attitude of Mr Holness and the fact that we find his answers to the integrity issues lacking, unsatisfactory and not credible, which is one matter; but equally important, is his obstinate refusal to do the right thing and apologise to the President of the People’ National Party and for his retraction and apology for his irresponsible and potentially dangerous statement at Sam Sharpe Square on Sunday 7th February, leaves us with us with no other option, but to decline.”

The Opposition leader allegedly called Portia a “con artist” in his response to a question during an interview with the media on Nomination Day. A term the PM took personally and threaten him with a lawsuit. In a statement issued by the Jamaica Labour Party (JLP), Holness alleges that based on information the Opposition received from the PM’s attorney, Simpson Miller is “trying to create a reason to say she will not participate in the national leadership debate.” Holness asserted, “We will not be distracted. The people of Jamaica want to hear from those seeking to lead the country. They want to hear from us on our plans and other issues of national importance. They want to make a comparison.”

Pre-election National Debates serve the Jamaica people well in allowing them a better understanding of the social and economic issues as well as learn the policies of both parties to make an informed decision at the polls. Jamaicans will go to the polls on February 25, 2016, to vote in the country’s 17th general election.

The concerns raised by the Peoples’ National Party regarding statement and utterances by the Leader of the Opposition are real and must be dealt with in the appropriate forum, namely, by reports to the Office of the Political Ombudsman and by action through the Courts of Law as the National Integrity Action affirmed. These concerns should not be used as a reason to deprive the Jamaican people of the opportunity to hear question and answers regarding plans to “Step Up the Progress” and concerning —The Path from Poverty to Prosper.

The PNP called Mr Holness’ Prosperity Plan a ‘con plan.’ The JLP in return said the PNP’s manifesto is more of the same promises that have been made ever election and adding, “The one difference is the fact that every new election their promises get more expensive.”

The PNP has since agreed to field questions from the RJR/Gleaner group as a substitute to debating the JLP.

In a statement dated February 18, the People’s National Party has accepted an invitation from the RJR Communications Group to engage in a 90-minute News and Current Affairs session focussing on the 2016 General Election. A PNP contingent of leading Party members led by Party President Portia Simpson Miller will field questions from a group of journalists drawn from within the RJR Group’s newsrooms. The session, the press release states, will be broadcast before February 22, 2016.

Minister of Finance and PNP campaign Director Peter Phillips said the Party views this RJR session as “a feasible and indeed an equidistant” opportunity to the National Debates in which the party has refused to take part in as a matter of principle.

Both parties should and must present their manifesto to the people and engage in a televised debate. Not only is it the right thing to do, but also the people of Jamaica have a right to be informed about the plans of both parties.

The PNP choosing not engage in a National Leadership Debate ahead of the general election is a slap in the faces of the Jamaican people though supporters of the PNP refuse to acknowledge this. They are robbing the people of Jamaica the right to necessary information, the parties’ future plans for the betterment of the country.

Clearly, this ‘situation’ has nothing to do with the integrity of Mr Holness; this has everything to do with the PNP’s leader Portia, making this about her and not about the people of Jamaica. She has been dodging reporters since she took office in 2012. Apparently, she is also fearful of embarrassing herself in the eyes of the Jamaican people, again.

If you have a grand, workable and well-researched plan for the country, why allow minor issues with the leader of the Opposition to derail your chance of directly presenting it to the people? Watch the listen to supporters of the PNP.

We have a PM and head of government who has been silent on many social issues and economic issues. This is a petty and coward move by the Prime Minister, who since assuming office has never sat down and given an interview to any local media. She avoids speaking to the nation unless it’s about the PNP’s so-called ‘achievements’. We do hope the PNP is held accountable for this act of fallacy; they do not respect our young developing democracy.

Any man or woman who votes PNP are among mentally slaved. Rise up and stop supporting mediocre politicians and politics, whether it be JLP or PNP. Portia has embarrassed Jamaican women and the country overall too many times. The electorate should vote JLP (or any other party) and send a clear message to the PNP and its leader that the Jamaican people should not be disrespected. It has also become evident that Portia doesn’t want to participate in a leadership debate because she doesn’t have a clue about what to say without looking at a piece of paper given to her by advisors or puppet masters.