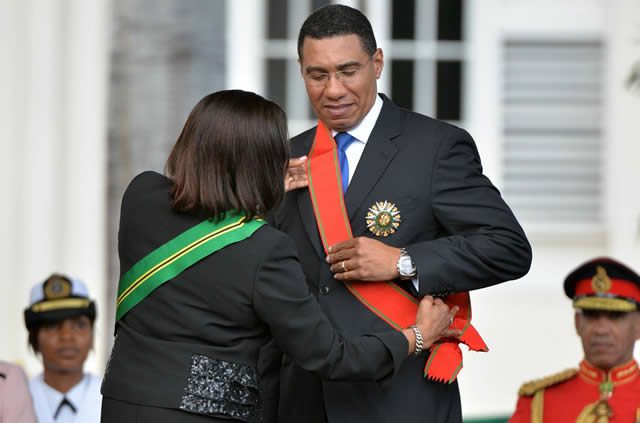 Andrew Michael Holness, a five-term elected member of Parliament, was sworn as prime minister of Jamaica for the second time in five years at King’s House in St Andrew this afternoon, Thursday, March 3, 2016.

Governor-general Sir Patrick Allen presented the Instrument of Appointment to the Prime Minister, the Most Hon. Andrew Holness, ON, MP.

Holness, having taken the oath of allegiance and oath of office, also signed the instrument of appointment as prime minister, much to the delight of those gathered to witness his appointment.

The standard of outgoing prime minister Portia Simpson Miller was then lowered and Holness’ standard broken.

The Order of the Nation is often conferred on the Governor-General of Jamaica and upon any person who has been appointed as Prime Minister of Jamaica unless they are already recipients of the Order of National Hero.

Members of the order and their spouses are styled “The Most Honourable”, and members wear the insignia of the order as a decoration while appending the post-nominal letters ON to their name. The motto of the order is “One Nation Under God”.

Prime Minister, the Most Hon. Andrew Holness, ON, MP and Leader of the Opposition, the Most Hon. Portia Simpson Miller shared a light moment on the stage.