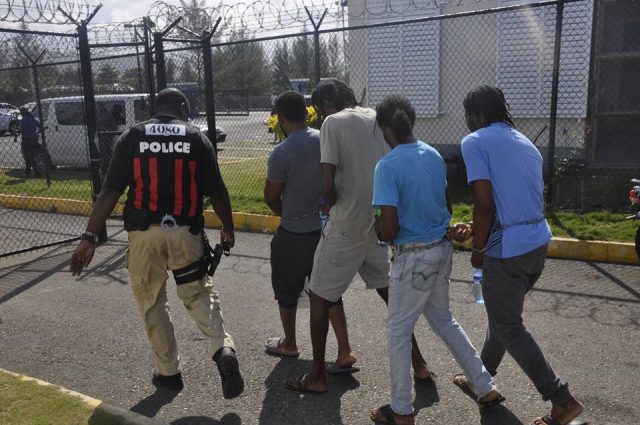 Nineteen persons, seven of which were wanted by the United States Justice system for lottery scamming related offences, were taken into custody on Thursday morning by members of C-TOC and MOCA during a multi-agency operation in four parishes.

About 3:00 a.m., members of Counter-Terrorism and Organised Crime Investigation (C-TOC) and Major Organised Crime and Anti-Corruption Agency (MOCA) along with their international partners and local law enforcement entities carried out a simultaneous operation in Trelawny, St. James, Kingston and St. Andrew.

During the operation extradition warrants were executed on seven persons – two females and five males – one of who is a Constable of Police, who was apprehended in the Corporate Area.

The other Twelve people who were detained in the multi-agency operation in St James, Trelawny and Kingston but have since been processed and released.

The C-TOC led operation, was assisted by members of the Mobile Reserve, the Financial Investigation Division, the Fugitive Apprehension Team and several US agencies, namely the United States Postal Inspection Services (USPIS), Federal Bureau of Investigations (FBI), the Department of Homeland Security (DHS/ICE) and US Marshall Service.

Assistant Commissioner of Police in charge of C-TOC, Devon Watkins stated that “the Police will not sit idly by and let criminals run a mock of the country.”

“We will not allow criminal activities to continue in our country, especially in western Jamaica. These operations are fully supported by local and international agencies and we will be relentless in detecting and prosecuting persons found in breach of the Law Reform (Fraudulent Transactions)(Special Provisions) Act, persons who commit firearm offences and financial crimes,” said ACP Watkis.

Acting Inspector in charge of the US Postal Inspection Service in the Miami Division, Delaney De-Leon Colon is thankful for the cooperation between Jamaica and the US.

“These arrests are a testament to the strong partnership between the United States and the Jamaican Government. We will continue to work together to combat this fraud,” said Mr Colon.