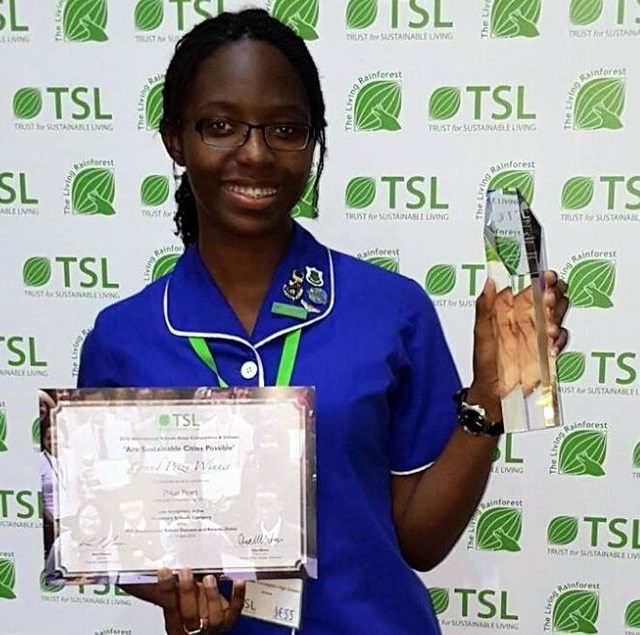 J’Nae Peart, a 6th Form student of Immaculate Conception High School, has won the Trust for Sustainable Living (TSL), 2016 International Schools Essay Competition. J’Nae snatched the top prize in the Secondary School competition and also won the overall grand prize out of a total of 1,115 entries.

The award was presented at the prestigious Jumeirah English Speaking School in Dubai, on April 19, 2016. J’Nae received the trophy, a cash prize and a fully paid trip to Dubai for a week at the beautiful 5 Star Media Rotana, accompanied by her teacher and parents.

J’Nae said that she wanted to enter an international competition and began exploring her options late 2015. After writing her winning essay, she spoke to her geography teacher Miss Tanya Cope about the competition and asked her to be her coach, as a teacher had to send in the application.

Organisers and judges were totally impressed with the structure and style of J’Nae’s essay. They were also wowed by her presentation skills when she participated in the debates. This landed her one of the coveted positions to represent the Trust in challenging the moot ‘Are Sustainable Cities Possible’? This was a thought provoking presentation to the executive body of Masdar City in Abu Dhabi, the capital city of the United Arab Emirates (UAE) on April 20, 2016.

Masdar City is the world’s first sustainable city with zero waste, zero carbon and a fossil fuel free environment. Seen as one of the most exciting development in recent times, the city is home to businesses, academics and residents. The goal of the city is the highest quality of life for all its residents with the lowest possible impact on the environment.

Quite fittingly, J’Nae has set her sights on a brilliant career in Environmental Law.