I AM A JAMAICAN
Home News Mary Seacole statue, UK’s first in honour of a named black woman,... 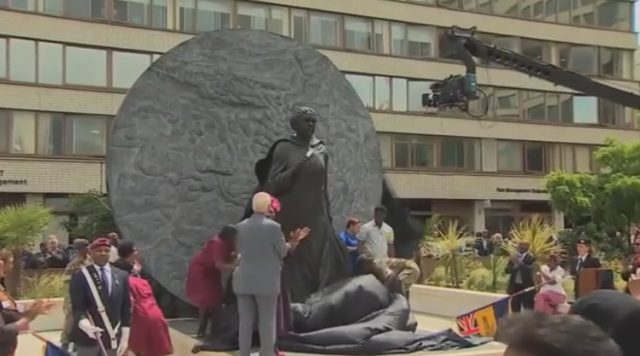 A statue honouring Jamaican-born nurse Mary Seacole has been unveiled at St Thomas’ Hospital. The statue, the UK’s first memorial statue in honour of a named black woman, stands in the hospital’s garden, opposite the Houses of Parliament.

Seacole cared for wounded British soldiers during the Crimean War in the 19th century. The statue’s completion follows a 12-year campaign which raised £500,000 to honour her.

The statue, unveiled on June 30, 2016, was created by sculptor Martin Jennings and stands opposite the Houses of Parliament in the grounds of St Thomas’ Hospital.

It is inscribed with words written in 1857 by The Times’ Crimean War correspondent, Sir William Howard Russell: “I trust that England will not forget one who nursed her sick, who sought out her wounded to aid and succour them, and who performed the last offices for some of her illustrious dead.” She was buried in Kensal Green in North West London.

In November, Chancellor George Osborne announced the Treasury would contribute £240,000 to help pay for the installation.

In 2013 transport charity Sustrans depicted Mary Seacole alongside other figures as part of their Portrait Bench Series commemorating local heroes. The two-dimensional steel portrait can be found along the walking and cycling route in Paddington Green, along with code-breaker Alan Turing and the children’s character Paddington Bear.