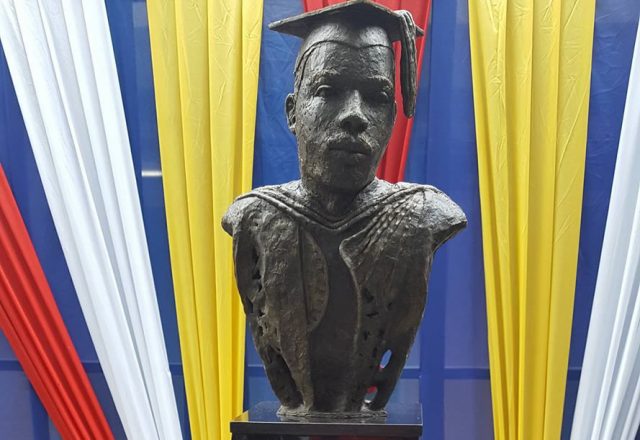 There is now a petition demanding the removal of a Marcus Garvey bust unveiled just over a week ago at The University of the West Indies (UWI), Mona Campus, Jamaica.

The petition demands that the university takes down the monument, sculpted by artist Raymond Watson, which portrays a slender Garvey in graduation regalia and to remount a genuine of representation of The Right Excellent Marcus Mosiah Garvey, Jamaica’s first National Hero.

“To unveil and raise a bust which denies this great Pan African of his racial identity, his strength of character, his defiance of the status quo and the pride in his African Identity is to betray everything that this great African Jamaican stood for,” the petition reads.

Many Jamaicans were left bewildered after sculptor Raymond Watson’s representation of Garvey was exposed at the courtyard of the Faculty of Humanities and Education at the University on May 19.

The ‘Fake Garvey Bust at The University of the West Indies Must Come Down’ has 38 supporters so far.

During the unveiling ceremony, the dean of the Faculty of Humanities and Education said, “As a faculty dedicated to the study of human civilisations, we thought it was befitting to erect this bust in our learning environment to constantly visually remind ourselves of the central place he occupies in our social consciousness.”

“We know what Mr Garvey looked like and we insist that any image that is meant to represent him at an important institution such as the UWI must look like him. No watering down of this great icon, please,” one objector said.

“This is utterly disrespectful to our first national hero and the people of Jamaica. Shame on the university,” said another.

A Gleaner article by Paul Williams, published last Wednesday, records more responses: “‘Tek it dung,’ one woman said calmly. ‘That statue does not represent Marcus Garvey – that’s a fraud,’ pronounced an elderly Rasta, donning the colours of the Universal Negro Improvement Association (UNIA). With photos of Garvey, and sometimes using expletives, he ranted until way after the formalities were over.”