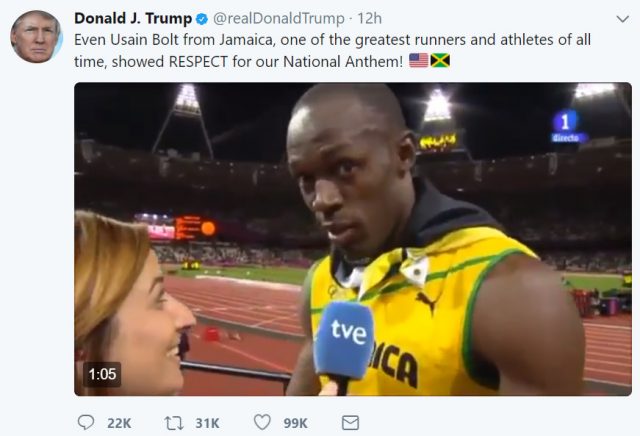 President Donald Trump tried to use Usain Bolt to criticize National Football League players who protest during the national anthem Tuesday night, but it quickly backfired.

Trump tweeted a video of the 100m world record holder pausing an interview at the 2012 London Olympics as the US national anthem began to play in the background along with the message: ‘Even Usain Bolt from Jamaica, one of the greatest runners and athletes of all time, showed RESPECT for our National Anthem!’

Even Usain Bolt from Jamaica, one of the greatest runners and athletes of all time, showed RESPECT for our National Anthem! ???? pic.twitter.com/zkenuAP9RS

The president outraged many at a rally in Huntsville, Alabama, on Friday with his thinly veiled attack on former San Francisco 49er Colin Kaepernick and other NFL players who have taken a knee in protest against police brutality and racial injustice during the national anthem before games, according to the Huffington Post.

Hundreds of tweeters went in on Trump. See tweets below.

For the love of God stop talking and don't bring my country and countryman in this whole debacle pic.twitter.com/HkAl1az3HP

Dear Mr. Dotard please hire someone to explain to you that the song/flag is not the target of the protest.