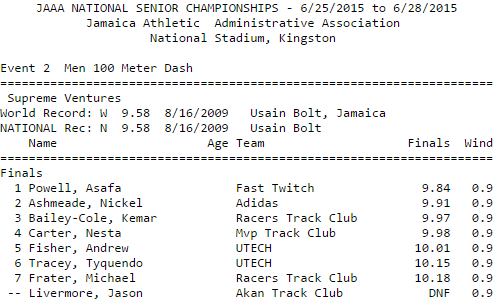 Asafa Powell ran the fastest time of the 100m semi-finals on day two of the National Senior Championships which is underway at the National Stadium in Kingston and will advance to the finals later tonight.

Powell displayed dominance in the first quarter-final on day 1 of the National Senior Championships at the National Stadium in Kingston on Thursday. The powerful Powell clocked 9.98 in a 0.2 m/s headwind to beat 2011 World 100m champion Yohan Blake to the finish line. Blake ran sluggishly for the first 40m of the race but managed to tie with Kemarley Brown of UTech for second place, both athletes clocked 10.24.

Nesta Carter of MVP won the second quarter-final in 10.12 ahead of Sheldon Mitchell of Swept Track Club who finished second in a time of 10.13, and Tyquendo Tracey of UTech, who came in third with a personal best of 10.14.

2014 Commonwealth Champion Kemar Bailey-Cole of Racers Track Club won the third quarter-final with a season’s best of 10.05 edging out Andrew Fisher’s 10.05 of UTech and Jason Livermore, 10.06, of AKAN Track Club.

Nickel Ashmeade cruised to win the 4th quarter-final in 10.04 ahead of two-time World Junior Champion Dexter Lee and Racers Track Club’s Jevaughn Minzie. Lee and Minzie both clocked a season’s best time of 10.18.

Here are the fastest times of the quarter-finals