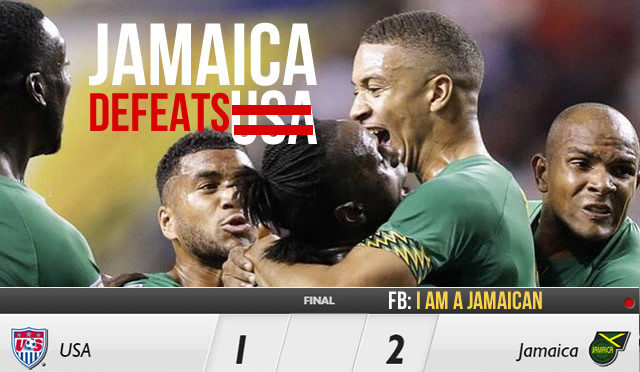 UPDATE: Jamaica makes history as the first Caribbean team to make to the CONCACAF Gold Cup final after defeating the US, the defending champions, 2-1 in the semifinals Wednesday night at the Georgia Dome via first-half goals from Darren Mattocks and Giles Barnes before surviving a frantic American rally to book a place in the final. Here are the highlights:

The United States remain Gold Cup favorites, but Jamaica is confident as they target a first CONCACAF Gold Cup title after winning a competitive Group B and disposing of Haiti in the quarterfinals. The United States will have to overcome Jamaica in Wednesday’s Gold Cup semi-final if they hope to successfully retain their crown in what promises to be their biggest challenge of the competition so far. The match is scheduled to start at 6 p.m. ET.

Through the group stage, the Reggae Boyz have opened many of eyes. Their persistence and determination had fans, the entire squad, plus coach Winfried Schafer excited about the rest of the tournament. Jamaica has used the momentum and experience of having played in the recent Copa America to go on an impressive run through the Gold Cup, reaching the semifinals for the first time since 1998.

The two sides will be meeting in the Gold Cup for the first time since the 2011 quarterfinals, which saw the Americans post a 2-0 victory. However, The Reggae Boyz made history in 2012 after beating the USA in the FIFA World Cup Qualifier at the National Stadium. Jamaica (2) – 1.

To this date, Jamaica’s best performance at a Gold Cup remains their third-place finish of 1993, an achievement more than two decades old and in desperate need of surpassing.