Update: Jamaica’s Giles Barnes scored the winning goal in the 7th minute to defeat Haiti in the quarter-final of the CONCACAF Gold Cup on Saturday (July 18). Watch the video below.

The Reggae Boyz will now move on to the Semi-finals to face U.S. on Wednesday, JULY 22 at the Georgia Dome in Atlanta, Georgia. 4 pm.

Watch the highlights JAMAICA vs HAITI

Team Jamaica targets their first CONCACAF Gold Cup title after beating El Salvador in their last match. The Reggae Boyz, who won two of three matches to sit on top of their Group (B) with 7 points on Tuesday (July 14), will play against Haiti in the quarter-final on Saturday.

Haiti finished second in Group A behind the United States after beating Honduras Monday night in Kansas City.  Haiti and Jamaica will face off the Gold Cup quarterfinals on July 18, 2015, at 8 PM in M&T Stadium in Baltimore, Maryland.

However, Defender Alvas Powell has walked out on the Jamaica national football team in the middle of the ongoing CONCACAF Gold Cup. Powell reportedly left the Jamaican national team on Wednesday morning ahead of their quarterfinal match against Haiti on Saturday (8 pm ET; Fox Sports 2, Univision, UDN in the US, Sportsnet World in Canada). Powell didn’t appear in either of Jamaica’s first two group stage matches before coming off the bench for the Reggae Boyz in the second half of their Group B-clinching win against El Salvador on Tuesday.

Jamaica were already shorthanded for Saturday’s quarterfinal, with Houston Dynamo defenderJermaine Taylor having been ruled out of the tournament due to injury on Wednesday and FC Dallas midfielder Je-Vaughn Watson (yellow card accumulation) and Vancouver Whitecaps striker Darren Mattocks (red card) both suspended for this weekend’s encounter.

Reggae Boyz head coach Winfried Schafer told the Jamaican Gleaner that he told Powell that he would be relying on him to help fill-in for the missing players before the 20-year-old left camp. The Gleaner reported that Powell was unhappy with his lack of playing time with Jamaica.

“I told [Powell], ‘your time is coming,’” Schafer told The Gleaner. “We need all players, we need Michael Hector, we need you, we need [Simon] Dawkins, we need Ryan Thompson.”

Schafer said that he will add University of North Carolina midfielder Omar Holness and another player to his squad prior to Saturday’s quarterfinal in Baltimore.

“When he does not want the shirt of Jamaica or the Jamaica Football Federation, I cannot help him,” Schafer said.

“For me he is the past. I have to watch what we’re doing now.”

The two Caribbean nations met twice in 2004, a month after the coup d’etat in Haiti. The teams drew at 1-1 and then Jamaica won 3-0 in their second meeting. The last time the two met was in a 2009 international friendly, and it ended in a 2-2 draw. 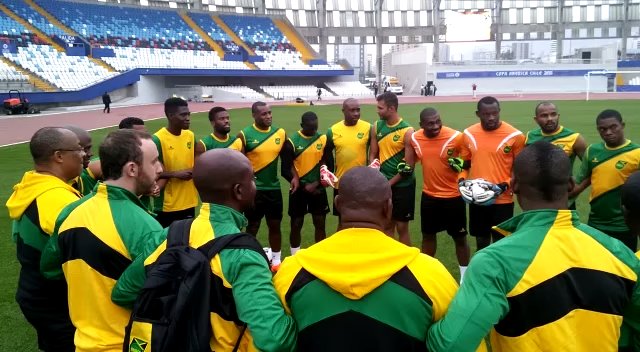 The Reggae Boyz have proven to be stronger, confident and more focused since the start of the tournament after a 2-2 draw with Costa Rica. The Boyz made their mark this year in the Copa America and have applied that experience in the Gold Cup.

Despite the loss of four key players, two to injury, including their starting goalkeeper, and two to suspensions for receiving red cards, the Haitians will have to play well to defeat Jamaica, unlike previous years.