I AM A JAMAICAN
Home Sports Jamaica vs Mexico: Thou Shalt Not Fight on Sunday! lol 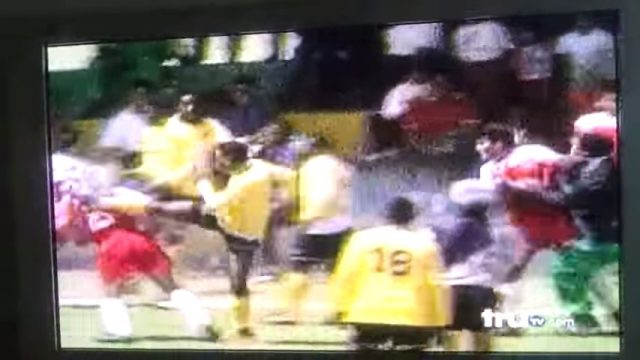 Jamaica will face aggressive Mexico on Sunday at Lincoln Financial Field on July 26 at 7:30 pm ET. However, due to how the Mexicans supporters and players are, most times playing unfairly while their supporters throw trash at rivals — most recently, Trinidad — many Jamaicans and supporters alike are hit with the memories of the famous yet ridiculous fight.

In 1997, Jamaica had reached the final pool in the north and central American qualification tournament for the 1998 World Cup, and harbored real hopes of reaching the finals for the first time in the country’s history. Three teams from a six-strong group would make it to France: with Mexico and the United States hot favourites to grab two of the places, and Canada a complete waste of space, the final spot was expected to be a three-way contest between Jamaica, Costa Rica and El Salvador.

Jamaica had started the group solidly, holding the USA to a 0-0 draw at home, so with a testing fixture in Mexico City coming up, their Brazilian coach Rene Simoes decided to do the professional thing and spend plenty of time acclimatizing in the Mexican altitude. Sadly that would be just about the only professional decision made on the trip.

Simoes arranged a game with local team Toros Neza. Sadly it descended into light farce. On 19 minutes, Toros Neza’s German Arangio was scythed down by an errant Jamaican challenge – and responded by getting up and crumping his fist into his aggressor’s face. The act provoked a full-scale melee between the two teams involving haymakers and high kicks which continued for five minutes – at which point several of the Jamaican team left the field and came back tooled up. With their players waving bricks, broken bottles and, preposterously, a chair, the referee had no option but to call the game off there and then. Here’s it again from a direct perspective:

“That is not normal behaviour,” one Neza player remarked after the match. “It isn’t possible that they react like this in a friendly,” Simoes argued that his team simply lacked international experience – though he was hardly one to talk; having forgotten to inform the Mexican FA that his squad were setting up camp pre-qualifier, the Jamaican FA were hit with a fine by Fifa. Whether the acclimatisation period was worth all the bother is a moot point: Jamaica were shellacked 6-0 by Mexico. Jamaica would make the finals, though, beating future hosts Japan 2-1 in a glorious valedictory game in Lyon.