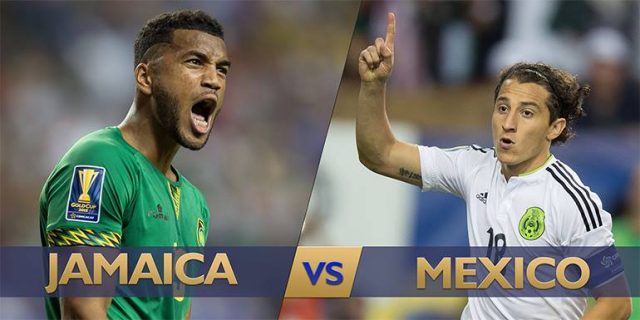 Jamaica to defeat Mexico today! The Reggae Boyz made history as the first Caribbean team to make to the Gold Cup final on Wednesday. The First-time Gold Cup finalists stunned the U.S. and the world with a 2-1 victory. The Boyz will play mexico in the Gold Cup at the Lincoln Financial Field on Sunday July 26 at 7:30 pm ET.

+40y in Football, saw it all, but believe me I’ll never forget this night #GoldCupFinal THANK YOU ALL @ItsTheJFF #GoldCup2015 #Jamaica

Schaefer did his best to keep his players focused on the history still to be made on Sunday at Lincoln Financial Field on July 26 at 7:30 pm ET.

Mexico’s Andrés Guardado scored two penalties. The first awarded under controversial circumstances just before the end of regular time, and a second in the first half of extra time, gave Mexico the edge over 10-man Panama in a 2-1 win, meaning El Tri will face for the regional championship.