I AM A JAMAICAN
Home Sports Watch Mexico vs. Jamaica Highlights: 3-1, Jamaica Bags US$500,000 as Runners-up 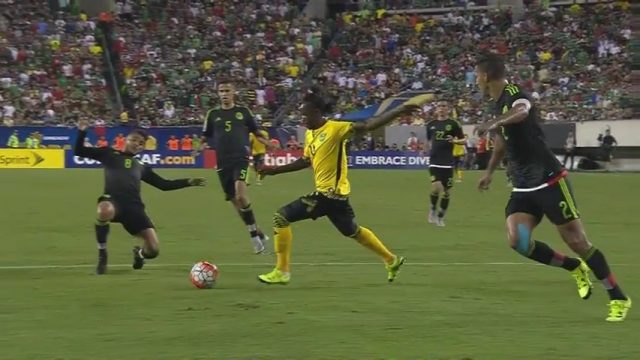 Jamaica’s Reggae Boyz were defeated 3-1  to Mexico in the final of the CONCACAF Gold Cup at Lincoln Financial Field in Philadelphia on Sunday night (July 26), affording the Central American side their seventh title.

Jamaica played an impressive first-15-minutes, forcing the Mexicans to defend, but the Central American side took control of the remaining 30 minutes through to the second half of the match. Jamaica didn’t defend well nor did they put enough pressure on the Mexicans to secure the win. Watch the highlights:

Mexico’s captain Andres Gaurdado scored the opening goal in the 31st minute to intimidate the Reggae Boyz. The follow-up goals eventually broke the Jamaicans heart when Jesus Corona scored in the 47th minute then Oribe Peralta in the 61st minute.

Substitute Darren Mattocks, a scorer in the 2-1 semi-final win against the USA in Atlanta last Wednesday, restored Jamaican pride with an individual goal in the 80th minute.

Mexico will collect US$1 million for lifting the Gold Cup, while Jamaica will bag US$500,000 as runners-up. Jamaica created history last Wednesday, becoming the first Caribbean team to advance to the Gold Cup final.