A strong Jamaican team is set to participate in this year’s staging of the XVII Pan American Games in Toronto, Canada, from July 10 to July 26.

Sixty-five athletes and 28 officials were named. Jamaica will compete in seven sporting disciplines including athletics, badminton, cycling, golf, shooting, swimming, and tae kwon do. See the full list below.

However, just a hand full of those athletes were on camera at the opening ceremony last night. Watch the video below.

Jamaica’s largest team is in athletics in which 50 of the athletes will compete. The team includes Kerron Stewart, Simone Facey, Sherone Simpson, Leford Green, and Rasheed Dwyer, among others. We have become a bit greedy and we have not been able to satisfy with anything less than the best; support our athletes and let them know that their best effort is always good enough.

Jamaica ranks 12th on the all-time medal count after 16 appearances at the Pan American Games.

Team Jamaica has earned over 100 medals and is expected to shine in this year’s staging. 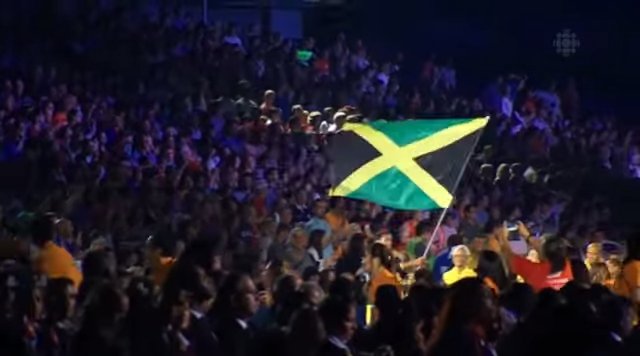 “Jamaica has an enviable record of performances at these games, and we are looking forward to more success. The Games are undoubtedly going to be very, very good. There are more than 350,000 Jamaicans living in Toronto, so we expect good support there,” said JOA’s president, Mike Fennell at the press launch held at the Jamaica Olympic Association premises in Kingston, on July 2.

Many of the events throughout the Games, will be streamed live on ESPN3, which doesn’t require a cable subscription. Here’s all the information you need to know about WatchESPN and ESPN3.