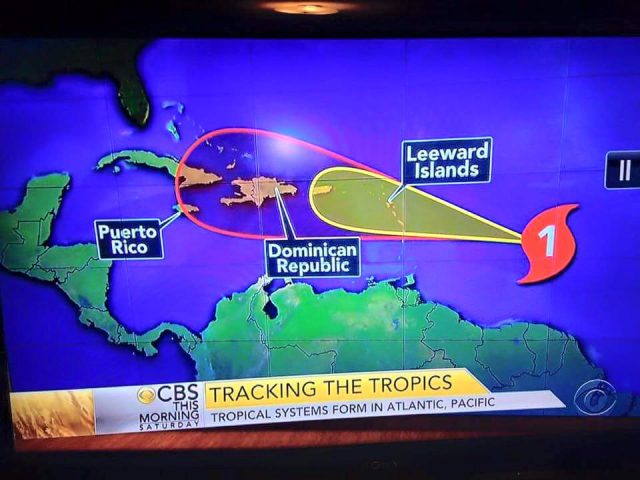 Jamaicans and Puerto Ricans watching CBS This Morning on Saturday scratched their heads when the news outlet broadcast a map of the Caribbean that made the U.S. territory appear to have replaced the sovereign nation of Jamaica. If that’s the case, then Jamaicans should be able to enter the U.S without a visa!

It’s not the first geography fail by a major U.S. network, and we doubt that it will be the last. Less that cogent cartography has plagued print outlets as well,  from the Economist(who grossly overstated North Korea’s missile threats) to the New York Times (who prototypoed the nation of Kyrzbekistan). CBS’ Puerto Rico drew lols on Twitter from Puerto Ricans who posted screenshots of the show as it aired live.

The CBS report tracked Hurricane Danny on a map of the Caribbean, which it predicted would pass from east to west over the Leeward Islands, an apparently unnamed island (actually Puerto Rico) before diminishing over the Dominican Republic and two other unnamed political entities (Haiti and the Cuba) before threatening the island of “Puerto Rico” (actually Jamaica). In fairness, the online print edition of the CBS report got it right.

“‘This storm has created a lot of expectations,’ said Carlos Anselmi with the National Weather Service in San Juan. ‘But we cannot talk about how much rainfall is expected because the storm is quite small. There’s a lot of uncertainty still,’” the website wrote.