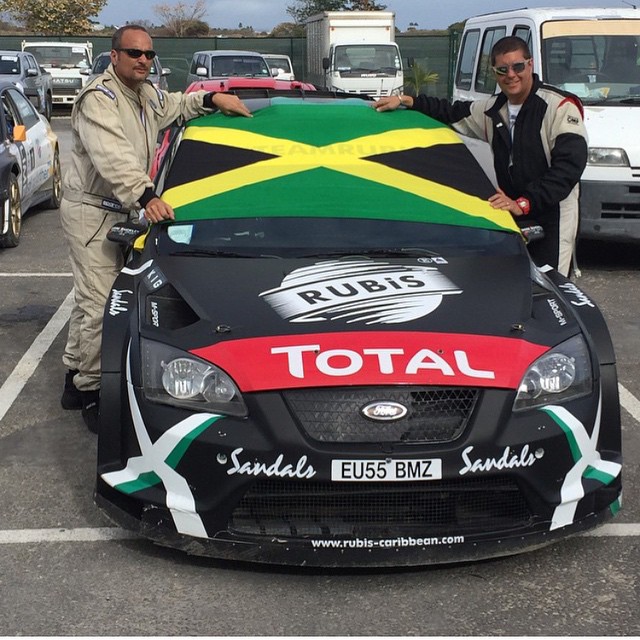 The last time a Jamaican team won Rally Barbados was in 2006. That team consisted of the pairing of Gary Gregg and Hugh Hutchinson in a 2002 Ford Focus RS WRC.

In 2015, Jamaica’s Jeffrey Panton and Mike Fennell Jr led an overseas lock-out of the Sol Rally Barbados podium over the weekend (May 29-31), as the Barbados Rally Club (BRC) celebrated the 25th Anniversary of its premier event with a record-breaking entry.

After the results were made final on Monday, Panton and co-driver Mike Fennell Jr received their awards from Gina Cummins, brand, communications & external affairs manager of Sol Caribbean, at a packed Prize-giving at The Boatyard beach bar in the island’s capital, Bridgetown. As well as trophies for first place, victory in WRC-1 and highest-placed overseas 4wd, they each received a Tissot watch from Little Switzerland.

Panton, who last won the event in 1998, said: “It was by far the most difficult rally to win that I have ever competed in. The pace was absolutely on the limit from start to end with mere hundredths separating the top three on each stage. To win against such a quality field means a lot; to come out on top by such a small margin after three days of war was very rewarding. This has definitely gone down in my history book as the most accomplished result.”

After months of planning, the BRC had more than one reason to celebrate its landmark: records broken included the number of overseas entries (45), overseas participants (89), first-time overseas participants (43), cars in the 4wd classes (28) and female competitors (16). Thousands of island fans lined the route, particularly at the Friday evening Start and Sunday SuperSpecial at Bushy Park Barbados and Saturday’s LIME/Banks/Automotive Art party stage at the Vaucluse Raceway.

With his winning co-driver of 2013, Welshman Aled Davies, Bird won the opening stage on the 1.8-kilometre Race Of Champions parallel track at Bushy Park by 0.34s, but was beaten second time around by Jean-Joseph, from the French Caribbean island of Martinique, who was co-driven by Jack Boyere, with whom he shared his two ERC titles.

Jean-Joseph had a slender 0.19s lead overnight, extending it to 1.30s with fastest time on Saturday’s opening stage at Sailor Gully. Panton fought back, winning the first Spring Vale stage to lead by 1.91s, but trailed ‘Birdy’ and SJJ on Vaucluse – at 6.8kms, the event’s longest stage – allowing the Frenchman back into the lead.

The Jamaican made no mistake on the second loop, winning all three stages to lead SJJ at the lunch break, albeit by merely 0.69s, with Bird third. Behind this battling trio, former World Rally Championship contender Toni Gardemeister, with co-driver Timo Alanne, was a solid fourth, easing his way into the Suzuki SX4 WRC having not enjoyed a shakedown at LIME King of the Hill, as he was on WRC duty in Portugal. Last year’s runner-up Rob Swann (Subaru Impreza WRC S11) and 13-time winner Roger Skeete (Impreza S12) were scrapping over fifth place, as they would for the duration.

Panton won both after-lunch runs of Sailor Gully and the one run through Spring Vale, while Bird twice ruled at Vaucluse, to end the day 1.5s behind Panton, with SJJ third, 5.74s adrift. The gap to Gardemeister was around 38s, he in turn 54s ahead of the squabbling Subarus, Swann ending the day 5.03s up on Skeete.

Panton would not claim another stage win, as Bird fought to narrow the gap and SJJ fought back. Fastest in the east of the island on the first Drax Hall and the second Malvern (the first cancelled after a non rally-related accident), Bird was within 1.18s on Panton after 18 stages, with SJJ another 4.54s behind, having won the second Drax Hall and Jack in the Box (an shorter, uphill, version of Vaucluse).

By now, intermittent showers were playing their part in the event on the eastern stages, then Bird spun on the second Jack in the Box, handing second to SJJ, who won that and the final two stages to close within 2.09s of Panton. Bird’s spin cost him second place, but whether he would have caught Panton is less clear. He said: “There was very little in it all weekend and just one mistake would be crucial; so it proved. Well done to Jeffrey, the best man won and it was an honour to battle with a legend such as Simon.”

Gardemeister’s fourth place was never under threat and he entertained the huge crowd at the SuperSpecial – times did not count for the results – with a stunning display of donuts. Free expression was the order of the day at Bushy Park, where competitors, their service crews and families mingled with marshals and spectators at the finish.

Skeete finally saw Swann off for fifth place, with the top two-wheel-drive car seventh, Rhett Watson (BMW M3) one place better than his 2014 overall result. As last year, the anticipated 2wd battle had rather petered out: top seed at eight, Josh Read (Toyota Starlet), was OTL by the end of Saturday; Neil Armstrong (Starlet) lasted only three stages before his clutch cylinder destroyed itself; Dane Skeete (Peugeot 306 Maxi), an impressive sixth overall overnight Friday, was out with a dropped valve after SS11; Roger Mayers (WR Starlet) disappeared at the same time with suspension damage.

Watson said: “We were having a great fight with Dane after Roger dropped out. Just as we passed Dane for the 2wd lead, in the night time Orange Hill, we passed him on the side of the road with an issue. From there it was smooth sailing.” Watson also won SuperModified 12, his fourth straight class win, with Justin Campbell (M3) finishing second and 15th overall, despite driving for most of Sunday with no windscreen, he and co-driver Juan Watts equipped with goggles to protect their eyes.

After Britain’s Roger Duckworth (Impreza S6) retired with gearbox failure, the fight for WRC-2 was between his fellow-countryman Kevin Procter (Impreza S7) and local Toyota dealer Roger Hill (Corolla WRC), who was in control after Procter’s car kept cutting out or refusing to start. Things improved for the Englishman on Sunday, however, and he chipped away, passing Hill two stages from home for the class win and eighth overall.

Group A and GpN were also incredibly hard-fought: in GpA, KotH class-winner Ireland’s Joe McQuillan (Mitsubishi Lancer Evo IX) ran strongly throughout, but Rupert Lomax (Evo VI), who had been delayed by ECU problems on day one worked relentlessly on Sunday, the Welshman cutting the 25-second deficit slowly but surely, passing McQuillan on the final stage for 11th overall and the class win.

Behind them, Trinidad’s John Powell (Evo IX) was hunting down Andrew Mallalieu (Impreza N10) in GpN; after Powell had issues on Saturday, the local man at one point led by 50secs, only to hit a tyre in Vaucluse, then have a puncture in Sailor Gully. That left them 7.5secs apart on Sunday morning: Powell chipped away, Mallalieu recovered a little in the rain, starting the final stage 0.25secs ahead. Despite Powell beating him by 1.97secs to claim GpN, Mallalieu described it as “the best rally of my life!”