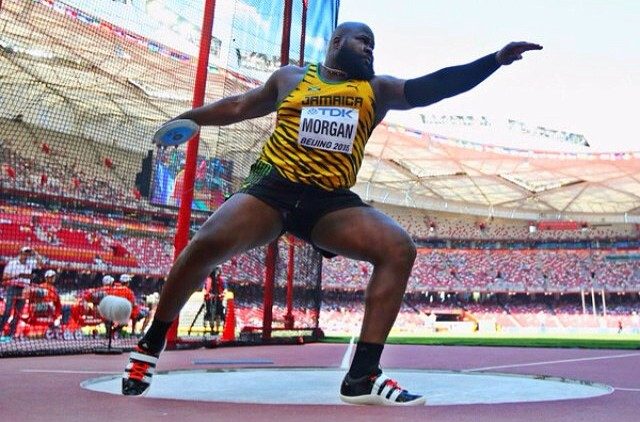 Road To Rio 2016 Olympic Games: Jason Morgan, national discus record Holder and 2014 Commonwealth Games bronze medalist, has inked a deal with apparel manufacturer Puma. The deal signed December 2015 is expected to run until the end of his career.

For years, Morgan has endured significant financial difficulty while training in preparation to represent Jamaica. This deal will assist him with coaching, gear and allow him more freedom to focus on his preparation to win an Olympic medal in what could be his last Olympic Games in Rio, Brazil this summer.

Last June, the discus thrower set a new national record of 68.19 metres in Pearl, Mississippi. It was the second best throw in the world for 2015.

“It’s like a dream come true,” said 33-year-old Morgan of the shoe contract. “They have supported Jamaica’s track and field and the world’s best athletes. They will assist me on the rest of my journey. It’s a blessing to be able to be part of a pioneer brand, and I will continue to inspire and break down barriers, and give young and old people hope to believe in themselves, no matter what the journey,” the Jamaican told the Gleaner.

“We have never been involved with a thrower before,” Pascal Rolling, PUMA’s international head of sports marketing for running, revealed, “He is the first one we signed as a thrower, but it’s more to do with his personality and charisma. He is a great entertainer as well, and even though he is not in the most attractive event for us, because of his personality, character and charisma, he is the perfect fit for the brand,” he noted.

Morgan, who shares clips of his training sessions on social media regularly, believes his work ethic and affable personality helped land him the Puma contract, revealing that officials there have told him that they have always admired his will power and hard work, as well as his character.

“I am working a part-time job while I train and at this moment, training is going hard and well. I have a set workout plan and different cycles for the season. I also have a couple of great coaches that will assist me on the road to the Rio Olympic Games,” he shared. “I have great support and a management team, and it’s a blessing to have Puma as my sponsor.”