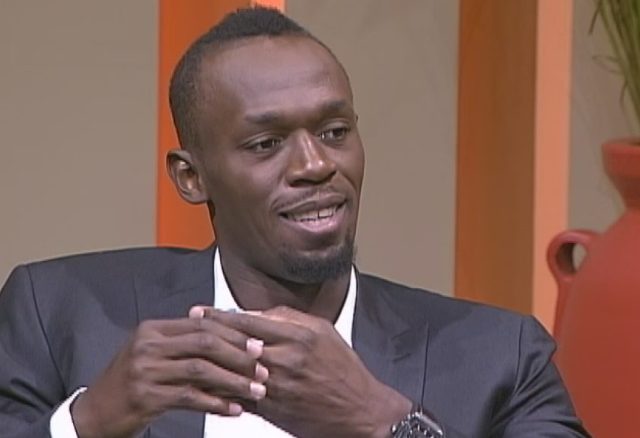 Usain Bolt has revealed some interesting things about his personal life in a tell-all interview on January 17 during TvJ’s Profile with veteran Jamaican journalist Ian Boyne; a 2-year relationship and marriage.

During Sunday’s ‘definitive’ interview, the spirit legend blushed as he admitted that he’s in a steady relationship with a Jamaican woman. He didn’t named her but asserted she is 26-year-old from Old Harbour which is located in St. Catherine, Jamaica.

If you are wondering why hasn’t he signaled that he is off the market: Bolt also explained that he has been trying to keep his relationship on the low to protect his future wife.

“I have tried my best to keep it on a certain level. I have explained to her that when it comes out it’s not gonna be as she thinks it’s gonna be. A lot of people will try to attack her, so I tell her to just take it easy and let’s make sure that you’re ready for this before we actually make the move..,” Bolt divulged. This photo believed to be of the couple has been making rounds on social media since late last year.

How does she deal with all the rumors that he’s are party-man or a girls’ man? Bolt declared she’s not a jealous person but later added, “every woman has a bit of jealousy in them.”

“When started our relationship, I kinda put on a guard from early out and explained to her this how I am as a person: I am young and I’m still in the phase which I like to have a bit of fun. She takes it well and she understands, but I don’t try to disrespect her in any way,” Bolt said citing he wouldn’t take out another woman to a club or dinner out of respect.

Bolt also expressed he doesn’t go out for dinner often unless it is with his girlfriend whom he tries to spend a lot of time with. In this photo, some claimed he treated her gifts.

“I don’t definitely hide,” the 29-year-old confessed, “but we don’t try to put it out in the media like ‘here she is’ because I personally know what’s going to happen. I remember I said to her ‘listen to me, you need to tell me everything from now because I will hear and mi nuh want nutt’n too shocking hit me; so you need to tell me from now so I know and understand what the situation is…so I can say I knew ‘that’ before because the press will dig and people will talk.”

Bolt also revealed that he have not had many girlfriends. “Officially, I had 3 or 4 girlfriends. I’ve always had long relationships except a very short one,” he said citing he seeks stability in a relationship.

The world fastest man assures fans he will settle down and marry one day, but it would be no time soon — beyond age 34 but before 50. “Marriage is a big step…I have to make sure it is the right girl. When I get married, that’s it; fooling around done. I have to be comfortable with myself to say ‘ok,’ I can do this. I want to be comfortable enough that when I see another girl I can say ‘she’s look hot,’ but that’s it, you understand? I don’t need to be flirting with her and trying to…you understand? I wan to be comfortable enough. Me and [my girlfriend] talk about everything…everything.”

When asked what does he look for in a woman, Bolt revealed that the physical attributes, specifically a thick posterior, is the first thing that will grab his attention; adding,”I date mostly curvaceous women.”

“I have principle… Not even for a fling, I am not that type of person. I have been in the situation where a married woman, never used to wear her ring and I never knew until the last moment and I said ‘no I can’t do this’,” Bolt said.

He added: “My thing is.. If you are married you should be happy, if you are not happy leave the person. That’s how I see it so why should I involve myself? I was brought up in the church so I believe in the Bible and I believe in God.” Bolt who went on that he tries not to stray too far from the Bible.

On why he hasn’t had any children as yet, Bolt, who noted that his father has three children with three different women, said “I’ve told myself that I don’t want to be like that. I told him, “daddy, listen, I’m not gonna be like you.” He said this is why he is not pressured into having kids just because all his friends do. “I want to stay away from the baby mama drama. I can’t deal with it,” Bolt said as he laughed, adding “I have to have all my his three children with one woman. This is what I really want.”

Part two of three of ‘Usain Bolt on Profile’ will be aired next Sunday, January 17 on Television Jamaica at 6:30 p.m. local time.