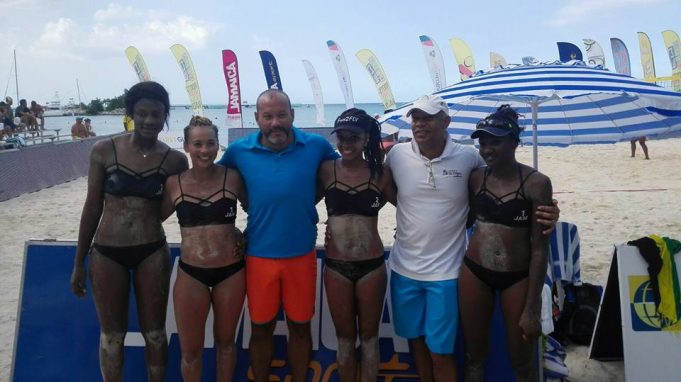 Jamaica has taken third place in the Second Round of the Women’s Beach Volleyball Olympic Qualifier after defeating French St. Martin on Sunday, January 31.

Team Jamaica competed against 11 other countries earlier today, beating the Cayman Islands (3- 1) to contest for third or fourth place finish. Jamaica went on to beat the French St. Martin (3- 0) to continue their quest for a spot in the 2016 Rio Olympics.

Trinidad & Tobago defeated Barbados (3-1), winning the gold medal. Barbados had to settle for the silver medal.

Team Cayman then moved on to play against Suriname for 4th place. A total of eight teams qualified to compete in the second Round of Olympic Qualifiers held at the Ocho Rios Bay Beach, Ocho Rios, St. Ann.

Eight teams have guaranteed themselves a place in the third round in El Salvador in May where the winner will advance directly to the 2016 Olympic Games in Rio. They are Trinidad & Tobago, Barbados, Jamaica, French St. Martin, Suriname, Cayman Islands, U.S. Virgin Island and St Lucia.

The second and third place teams will enter a fourth round playoff in Mexico to reach the Olympics.

Jamaica men’s volleyball team is to contest bronze medal match at Caribbean Zonal Beach Volleyball Championship in Antigua. The team lost 3-1 to the US Virgin Islands. Jamaica started well with the pair of veteran Mark Lewis and Ryck Webb rallying past Brian Kwasny and Dillon Lusniak of the US Virgin Islands 21-16, 11-21, 15-10 for a 1-0 advantage.

Despite the defeat, Jamaica will still progress to round three where they will try to qualify for the Olympic Games in Rio de Janiero. The winner from round three will gain automatic qualification to Rio.