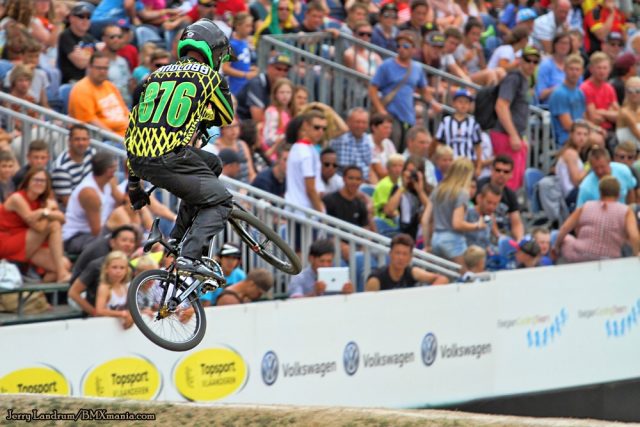 Maliek Byndloss proved he was one of the world’s elite BMX racers after winning the inaugural Jamaica BMX National Championship and crowned the country’s first national champion at the Eden Park BMX Track in Oracabessa, St Mary in last July.

Maliek is currently testing out the Olympic track in Brazil as he prepares to represent Jamaica at the 2016 Summer Olympics in Rio de Janeiro. Off the bike, Maliek is said to be very quick-witted and funny, much different than his “all-business” mentality on the track.

21-year-old Maliek has been racing BMX since he was six-years-old. All it took was one trip lo Miami South I3MX track, and he was hooked. “My dad took me to the track when I was little because he used to ride and he wanted me to watch the kids. After that visit, I wanted to try it out, and it’s been BMX ever since,” Maliek told FLmx Magazine last year.

Throughout the years, Maliek has been very successful earning himself 10 Florida state championships, and 15 national championships in the United States, which includes the 2013 USA BMX Amateur No.1 Championship.

In 2009, Maliek traveled across the world to compete in Australia at the UCI World Championships winning both the 14 Boys 20″ and 24″ championships. To this day, Maliek says that winning those titles was one of the best experiences he has ever had. “It felt amazing; I felt like I was on top of the world. I remember cro.ing the finish line in both main events with pure joy and the biggest smile on my face,” Maliek said.

In 2014, Maliek turned pro, and his success did not stop as he earned himself The 2014 No. 1 A-Pro Championship and the PULL Golden Crank Award, which is conferred to the most dominant rookie, Maliek would r.eive over half of the votes.

In 2015, things for Maliek changed dramatically when he made the decision to leave the United States of America Cycling (USAC) and join the Jamaica Cycling Federation (JCF). “For me, I wanted to switch to the JCF so I could represent my family and heritage,” Maliek said, whose parents are Jamaican.

Winning championships is not his only priority in Jamaica as he is coaching local riders as well. “I wanted to be able to change kids lives down in Jamaica because they have so much potential. The island has the best sprinters and BMX has a lot of the same techniques of sprinting so it shouldn’t be hard getting them quick on a bicycle after a few years of training,” Maliek said.

Maliek believes including the local kids in the sport will keep them off the streets and safe at the track. Maliek has a strong hand in building up the BMX program on the island and with help from his sponsors, he is able to send complete bikes and uniforms down there for the locals. “I see myself still riding and coaching down there even after I am retired; it is awesome to see the progression of the riders every time I go back down there, and I am proud to be a pad of it,” Maliek said.

Maliek currently residents in Cape Coral, Florida and when he’s not busy winning titles he attends Florida Gulf Coast University, where he is a part of the pharmaceutical program. Maliek is supported by the following sponsors: SSquared, Answer, Troy L. Designs, DeF.I, Sidi, Rennen, Tioga, Crit Plates, MJT Designs along with his friend and family.