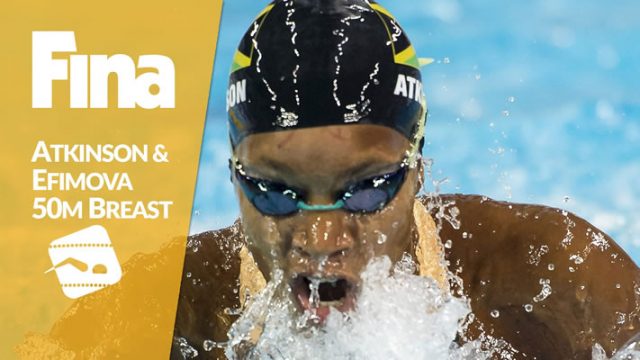 Alia Atkinson produced an impressive performance to win the 50m breaststroke in 29.00 seconds, only 0.20 seconds over the world record of Jessica Hardy on Day 2 ot the second stop of the 2016 FINA/Airweave Swimming World Cup Series in Berlin, Germany.

Atkinson, who stood 2nd in the points total behind Hungary’s Katinka Hosszu after the first stop in Chartres, France, beat Yuliya Efimova of Russia, who finished second in 29.08. American Katie Meili finished third in 29.37.

Kicking off the season at the 2016 FINA World Cup stop in Chartres last Friday, Jamaica’s Alia Atkinson swam the Women’s 100 Breaststroke in World Record fashion to win her first gold medal of the series.