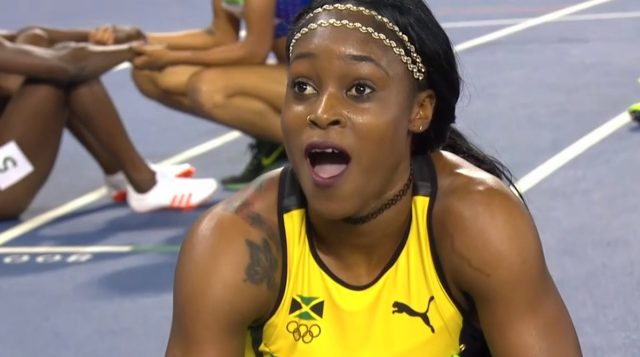 Elaine Thompson has won gold in the Women’s 200m at the Rio Olympics to become the first Jamaican female 200m and 100m Olympic champion at an Olympics — the second woman in history to achieve the Olympic sprint double title. Watch race below.

Thompson, the 100m Olympic champion, won in 21.78 ahead of her biggest rival Dafne Schippers, who finished second in 21.88. American Tori Bowie finished third in 22.15. This is the first Olympic sprint double since American world record holder Florence Griffith Joyner’s at the Seoul Games in 1988.

Watch Elaine Thompson win the gold in Women’s 100m, too.

Half Way Tree erupts the moment Elaine Thompson won gold in the 200m.

Thompson said her victory was made special by the former Jamaicans who have won the sprint events.

“It is very special for me to win,” she said. “I spent my childhood growing up watching Veronica Campbell-Brown and then Shelly-Ann Fraser-Pryce.

“To beat Dafne Schippers is a real fight and it was a tough race as I’ve had a hard season,” the Jamaican said, adding that she was worried earlier this season about even making the Games.

Elaine Thompson finished second in the semi-final of the Women’s 200m after challenging her biggest rival Dafne Schippers to qualify for the final. Schippers ran a very strong race, clocking 21.96, to keep Elaine Thompson in second place 22.63.