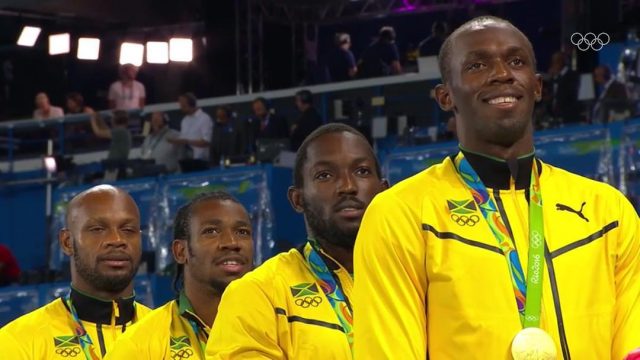 The Men’s 4x100m Relay team lineup was Asafa Powell to Yohan Blake to Nickel Ashmeade to Usain Bolt. Usain Bolt completed his triple-triple by anchoring the Jamaican men’s 4x100m to victory for the third time in as many Olympics. Bolt, who will be celebrating his 30th birthday on August 21, the final day of the Rio 2016 Olympics, won gold in 100m, 200m and 4x100m relay at the Beijing 2008 and London 2012 Olympic Games.

The time, 37.27, may not have been quite as impressive as in the past; the first two relay wins were both world records. Bolt got the baton from Nickel Ashmeade nearly even with Japan and the USA, but within strides he was already clear of both teams. As usual, he crossed the line with daylight between himself and the competition.