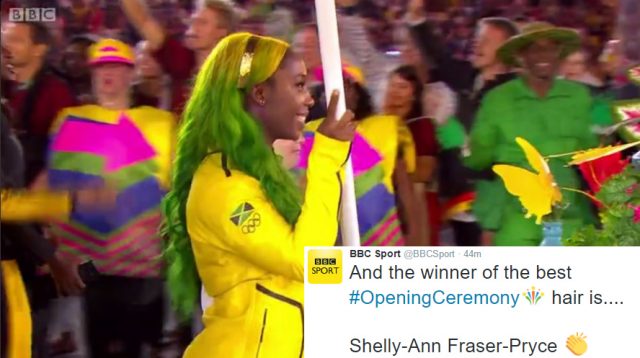 Shelly-Ann Fraser-Pryce carried the Jamaican flag as she led the Jamaican contingent inside the Maracana stadium during the opening ceremony of the 2016 Olympic Games in Rio de Janeiro, Brazil.

Fraser-Pryce was selected to be Jamaica’s 11th flag-bearer. According to BBC Sport, the winner for the ‘best Opening Ceremony hair’ is Shelly-Ann Fraser-Pryce.

And the winner of the best #OpeningCeremony hair is….

Usain Bolt, who carried Jamaica’s flag at the 2012 Games in London, confirmed through his Snapchat account three hours before the opening ceremony that he will be skipping tonight’s ceremony.

“Opening Ceremony time, but I won’t be there, people All the buses are out,” he said.

Bolt later took a video of his Jamaican team-mates getting ready to leave the Olympic Village for the ceremony, stating that he was too lazy to make the trip himself: “Looks like the whole squad is out, road movements. One big lazy par me den pon today, no movement for me.”