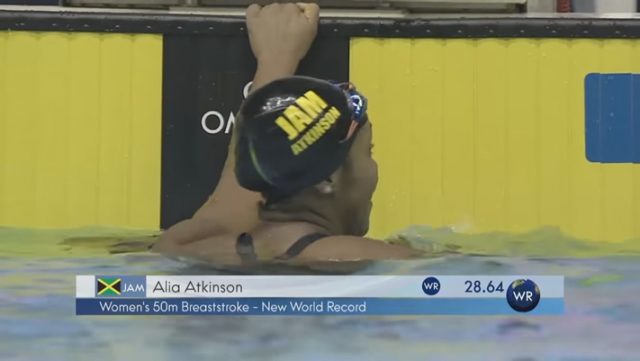 Alia Atkinson has broken the 50m short course breaststroke on the final day of the FINA/airweave Swimming World Cup Tour in Tokyo on Wednesday.

Atkinson, a Four-time Olympian Alia  of Jamaica, touched home in 28.64 secs, shaving 16 total hundredths off of the six-year-old World Record of 28.80 set by Jessica Hardy in Berlin in 2009, making here the female top scorer of the Tokyo meet together with Vladimir Morozov (RUS) for the male’s award.

The Jamaican’s effort deservedly propelled her to the top of the ranking points table for the meet, with 1,016, ahead of Hungary’s Katinka Hosszu (970). Atkinson was presented with a cheque for $10,000 for breaking the record.

That’s her second world record in SCM– she’s currently tied with Ruta Meilutyte for the 100m breast WR. Atkinson is one of only three women ever (in addition to Hardy and Meilutyte) to have broken the 29-second barrier in the 50 SCM breast. In Tokyo tonight, she placed 1st ahead of Russian Yulia Efimova (29.19) and American Molly Hannis (29.57).

After tying the 100 SCM world record on two different occasions (in 2014 and then again earlier this year in Chartres), Atkinson will now collect the $10,000 bonus from FINA for breaking a world record, along with 20 points towards her cluster bonus. This time, 16 hundredths give her more than enough distance from the old mark to grant her her OWN record (and the FINA bonus).