I AM A JAMAICAN
Home Sports Statues of Bolt, Asafa, Fraser-Pryce, Veronica To Be Mounted in Jamaica 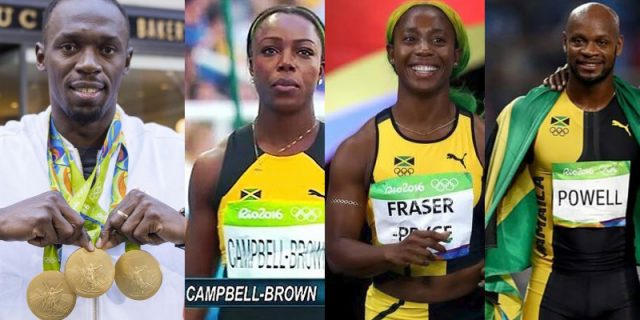 Four statues will be made of track and field stars Usain Bolt, Veronica Campbell-Brown, Shelly-Ann Fraser-Pryce, and Asafa Powell, in honour of their outstanding contribution to the development of Jamaican track and field.

According to the Jamaica Information Service (JIS), The Ministry of Culture, Gender, Entertainment and Sport has commissioned the production of statues of several track and field athletes over the next two years.

They will be mounted at the National Stadium Statue Park as part of a wider planned development of the stadium complex, which includes the National Sport Museum.

Sport Minister Olivia Grange, who provided details of the Government’s programme of activities to celebrate the nation’s Rio 2016 Olympic and Paralympic heroes, at Spanish Court Hotel in Kingston, today said the first two statues – Usain Bolt and Shelly-Ann Fraser-Pryce – will be completed in time for the Jamaica 55 Independence celebrations in 2017.

The statues of Veronica Campbell-Brown and Asafa Powell will be completed for the following year.

The statues will be crafted by renowned Jamaican artist and sculptor Hon. Basil Watson, who sculpted the statue of sports icon Herb McKenley.

Grange told JIS News that the celebrations will be held in honour of athletes based locally and those living overseas to celebrate their accomplishments.

The activities will begin on Friday, October 14 with a reception hosted by Prime Minister, the Most Andrew Holness on the lawns of Jamaica House.

This will be followed by the Rio Sports Gala and Awards Ceremony at the National Indoor Sports Centre on Saturday, October 15. The event will be broadcast and streamed live over the Internet.

The activities will culminate on Sunday, October 16 with the Jamaica National 5K Run/Walk. This fundraiser is in aid of charities in western Jamaica and is sponsored by the JN Group and supported by the Usain Bolt Foundation.

A reception will also be hosted at the all-inclusive resort Melia Braco Village in Trelawny, in honour of the athletes. This will commence at 7:00 pm.