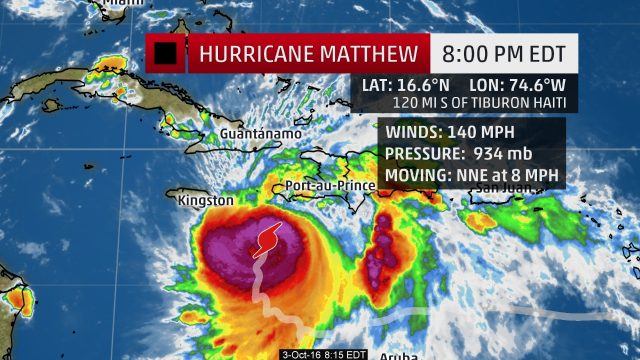 Category 4 Hurricane Matthew is now moving north, northeast away from Jamaica, and is headed close to the southwestern tip of Haiti late Monday. Matthew is moving at 8 mph (13 km/h).

Hurricane conditions are no longer expected for Jamaica, but the island will face tropical storm conditions including strong winds and very heavy rains. Vulnerable Haiti braced for flash floods and violent winds from the extremely dangerous Hurricane Matthew as the powerful storm approached the hemisphere’s poorest country Monday.

The eye of the Category 4 hurricane, with maximum sustained winds of 140 mph, is expected to pass east of Jamaica in a few hours and then over to the southwestern tip of Haiti, the U.S. National Hurricane Center in Miami said. Matthew is 200 miles South-West of Port-au-Prince, Haiti.

Forecasters said as much as 40 inches of rain could fall on some isolated areas of Haiti, raising fears of deadly mudslides and floods in the heavily deforested country where many families live in flimsy houses with corrugated metal roofs.