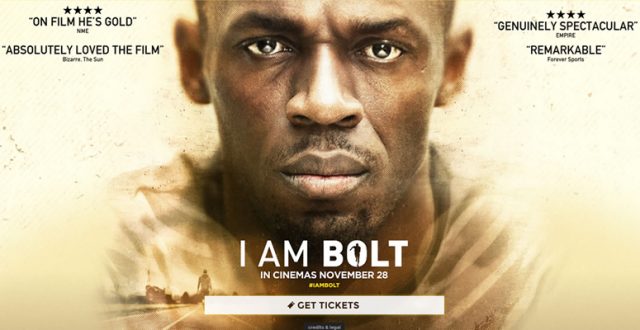 Usain Bolt‘s feature-length documentary ‘I Am Bolt‘ made its debut in cinemas on Friday. Several global sports stars such as Neymar, Serena Williams, PelÈ, and Asafa Powell made an appearance in the film which is also available online and in stores at iTunes, Amazon, Walmart, Best Buy including Barnes & Noble.

As thrilling as the competition clips, I Am Bolt reveals to us the globally adored icon, a man who defined athletics over the years, transcends sport and embodies his homeland, a man whose signature lightning pose has become a symbol of inspiration for generations now and to come. Watch the film at home here after watching the trailer below.

“I think you will see everything about me as an athlete and a person,” Bolt told Screen Dail in February. “Nothing is off limits, and the crew have already been following me everywhere I go. They started filming early last year and have been with me off and on since then.”

Throughout the hour and 47-minute film, Bolt shares unprecedented access to himself, welcoming us into his life as an Olympic and sporting legend, best friend, teammate and son. Experience first-hand and close-up what being Usain Bolt is really like – from his gruelling training days with his incredible coach and sprint team, to competing on the global stage, much of which was shot by Usain himself.

See how he overcomes major setbacks and challenges along the way and discover how he spends his down time and relaxes with his true inner circle, friends and family, allowing the directors unprecedented access into all facets of his life, both on and off the track. Hear from those closest to him – his parents, his agent, his coach, his fellow athletes and of course from the legendhimself. This is the real Usain – as you have never seen before.Raw, revealing, joyful and inspiring.

This dynamic documentary is directed by British film-house Fulwell 73’s brothers Gabe and Benjamin Turner.  “When I met Gabe and Ben and heard about their previous work, I felt they would be the right people to tell my story and capture my journey to Rio 2016,” Bolt said.