I AM A JAMAICAN
Home Sports Record-breaking Gold, Silver for Jamaican Girls’ 400m U-18 Hurdles 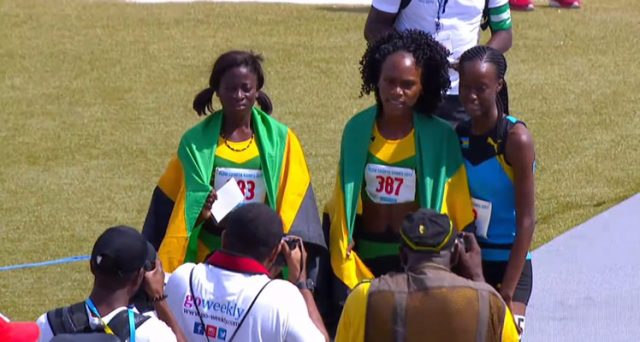 Jamaican Sanique Walker broke the Girls’ under-18 400m Hurdles record to win the gold medal for Jamaica on Day 2 of the 2017 Carifta Games underway at the Ergilio Hato Stadium in Willemstad, Curacao.

In the morning session of day two, Jamaica won three more gold medals, one silver, and a bronze.

Marie Forbes secured the first gold medal for the day when she won the girls’ Under-20 discus with a throw of 43.62m. Her teammate Kimone Reid walked away with the silver medal with 40.39m. Sah-Jay Stevens won a silver in the girls’ Under-18 shot put.

Fiona Richards, who broke the girls’ Under-20 discus record yesterday, took the bronze in the event with a 12.80m throw. Jamaica’s Carey McLeod won gold in the boys’ Under-20 long jump.