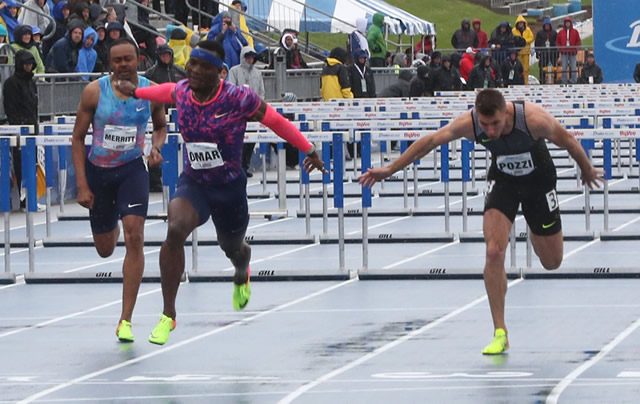 Olympic gold medalist Omar McLeod of Jamaica has set a new Drake Relays Record and world-leading time in the Men’s 110m Hurdles Elite with a time of 13.04, breaking his own record on Saturday. Watch the race below.

Mcleod, who won Jamaica’s first Olympic gold medal in the 110m hurdles, ran an impressive race through cold and rainy conditions en route to his fastest season’s debut on the final day of the Drake Relays held in Des Moines, Iowa, at Drake Stadium on the campus of Drake University.

The 23-year-old beat one of his top rivals on paper, Aries Merritt; the 2012 Olympic gold medalist and the world record holder of 12.80.  The other Jamaican, Andrew Riley, finished fifth in a time of 13.53.

In 2016, Omar ran through the competition all season long. McLeod broke the vaunted 13-second barrier for the first time, running 12.97, a time that leaves him just outside of becoming a top 10 performer of all-time in the event. Clearly, the young Jamaican is looking to lower his personal best this year.