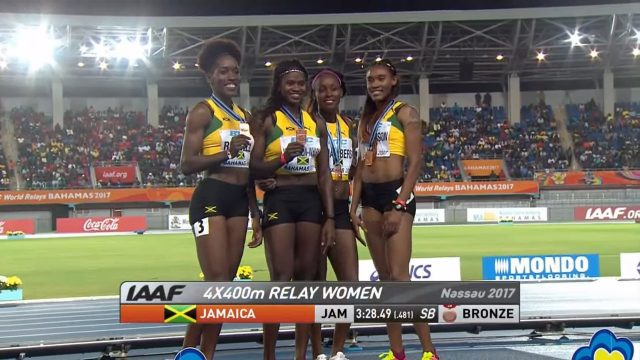 Jamaica’ women’s 4x400m team won the bronze medal on the final day of the IAAF World Relays at the Thomas Robinson Stadium in Nassau, Bahamas. Watch the race below.

The Jamaica team, Janieve RUSSELL to Anneisha MCLAUGHLIN-WHILBY to Verone CHAMBERS to Stephenie Ann MCPHERSON, finished third in a time of 3:28.49 behind the Poland, who clipped them at the finish line in 3:28.28. The US won the event in 3:24.36.

35 teams competed for US$1.26 million in prize money, the Golden Baton trophy and qualification spots for men’s and women’s 4x100m and 4x400m at the IAAF World Championships London 2017.

Action from Nassau’s Thomas A Robinson Stadium was available to watch across all the IAAF’s Continental Areas via a combination of coverage on the channels of several broadcasters and a geo-blocked live stream which was available in more than 110 countries.