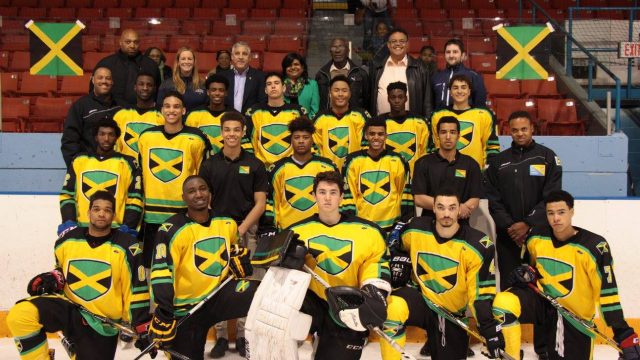 The Jamaican team, which made ice hockey history as the first Caribbean nation to become associate members of the International Ice Hockey Federation, won the exhibition game at the Dartmouth Sportsplex on Sunday.

The team is preparing to compete at Winter Olympics. The players are from Canada and the U.S., but they all share Jamaican heritage. Unlike the iconic 1988 bobsledders, this ice hockey team has a bit more experience. These guys have been playing hockey their whole lives, many of them playing in the Ontario Hockey League (OHL).

Over the weekend, the players of Jamaican descent also played against a team with prominent local players and community leaders from diverse backgrounds from the Halifax area at said Sportsplex the day before.

Former Boston Bruin player Graeme Townshend, who was born in Kingston, has hopes to coach Jamaica’s national hockey team all the way to the Winter Olympics.

Other events are being planned for the Jamaican team, according to CBC’s Paul Palmeter, including trips to the Nova Scotia Sport Hall of Fame and the Black Cultural Centre for Nova Scotia.

The aim of the exhibition games is getting more players from diverse backgrounds involved in the sport. The Nova Scotia government provided $50,000 for the games from the Nova Scotia 150 Forward Fund.