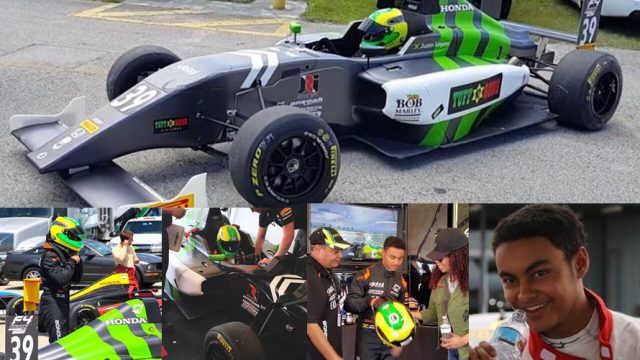 Justin Sirgany has entered the 2017 Formula 4 United States Championship — and is the first Jamaican to enter this competition. He’s struggling to get sponsorship and needs your help to continue on to the next competition which is June 8-11.

The 15-year-old has been busy training for the second leg of the 18-race championship series at Indianapolis Motor Speedway after practising at Homestead-Miami Speedway in Homestead, Florida, on April 8-9, which saw 33 cars on 14 teams participating in the event.

The F4 championship is the initial step after GoKart racing; the young drivers next step in their professional motorsport careers: Formula 4, 3, 2 through to Formula 1 racing.

Sirgany started his racing career at the age of 6 and progressed through the different classes at the Palisadoes International Raceway in Kingston to the Florida Winter Tour, US Grand Nationals and the Pan American claiming many podiums and wins.

Justin comes from a family of racers. He has been under the tutelage of his father, Steve Sirgany, a former racer at the Dover Raceway in Jamaica.

Justin Sirgany is sponsored by The Marley Group

The F4 U.S. Championship has seen significant growth over its inaugural season in 2016.

Sirgany turned 15 before the season-opener and under International Automobile Federation rules can start earning points toward a Super License, a qualification allowing the licence-holder to compete in the Formula One World Championship as a driver.

The next events will at the Canadian tire motorsport park Bowmanville, Ontario, Canada July 8-9 then Mid-Ohio Sportscar Course in Lexington, Ohio August 11-12. On from there at the Virgin International Raceway in Alto, VA on August 26 -27. Then the season will end at the Circuits of Americas in Austin, Texas on September 16 -17.