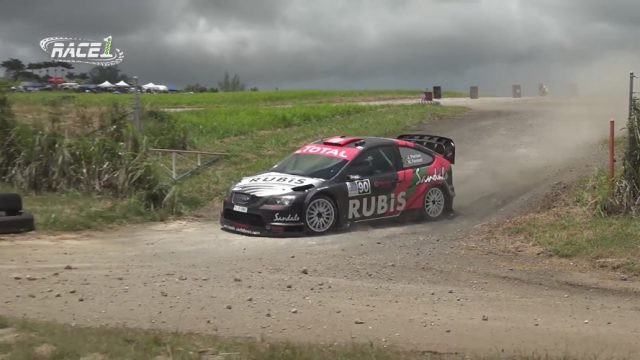 Jamaica’s Jeffrey Panton and Michael Fennell Jr drove impressively to become the first international team to achieve a three-peat at Rally Barbados 2017 last weekend (June 2-4), winning the event for the third consecutive year: 2015, 2016, and 2017. Watch the highlights below.

“The win is a little bitter-sweet because we damaged the car, but the result is what counts and it’s three in a row. I’m surprised at the nature of it, though,” Panton said after the race. “I knew we had an advantage and we’d be able to put down some good times, but I was surprised by the amount of time we put on, for sure.”

After the results were made final on Monday, Panton and Fennell were presented with their awards at a packed Prizegiving at The Boatyard beach bar in the island’s capital, Bridgetown.

They received the trophies for first place, victory in WRC-1 and highest-placed non-national 4wd, the most successful of the 25 overseas crews heading home with trophies.

Panton, who was the event’s first regional winner in 1998, had previously finished second to Northern Ireland’s Kenny McKinstry and ahead of fellow-countryman Doug Gore in 1996, and also led home Simon Jean-Joseph of France and Britain’s Paul Bird in 2015. Ulsterman Kris Meeke, Bird and Jamaica’s Gary Gregg filled the podium in 2008.