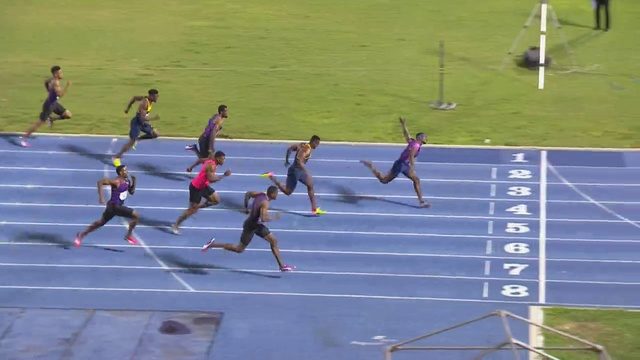 Olympic champion Omar McLeod has set a new national record of 12.90 and defended his National 110m Hurdles title at the Jamaica National Senior Trials on Saturday in the National Stadium in Kingston.

McLeod stormed over the hurdles and to the finish line to also set new personal best, a new world-leading time and the fifth fastest time in 110m Hurdles’ history. Ronald Levy and Hansle Parchment finished second and third respectively in a time of 13.13 and 13.19. In his post-race interview, McLeod said that he will break American Aries Merritt’s 12.80 world record soon as he also aims to become the first Jamaican to hold both the 100m Hurdles Olympic and World Championships titles this August

This is McLeod’s fourth consecutive victory this season after winning in 13.04 at the Drake Relays Record in Iowa, U.S. on Apr 29, then clocked 13.09 in Shanghai  on May 13 and then lowering that world lead to 13.01 at the Eugene Diamond League in Oregon, U.S. on May 27th in which Levy clocked 13.10 to finished second.

Note: We are not responsible for the content of external links.