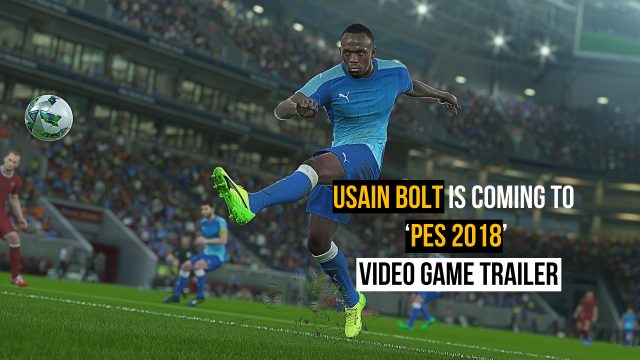 Usain Bolt will be available to Pro Evolution Soccer players later this year after Japanese entertainment company Konami revealed PES 2018 on Tuesday. Pre-orders will include the legend on MyClub mode.

The athletics legend, who won his final race in Jamaica soil on Saturday, will be an in-game player at launch exclusively with myClub when the game is released in September:

Bolt, who is a lifelong Manchester United fan, has long expressed a desire to play professional football and now the 30-year-old will be able to live out his dream in virtual reality.

“I love football and have played PES for as long as I can remember – it’s the best football game there is – and it’s a great honour to be a part of it and its success. When the opportunity arose to be a player in PES 2018, it was too good to be true. Having my face and movements scanned for use in the game was a fascinating process and I hope those who pre-order the game make full use of my pace and skill!”

Konami used its proprietary face-scanning systems to perfectly recreate the athlete in-game, while his running style and more importantly incredible pace will make him an asset to any side.

Usain Bolt opened his final track season with a winning time of 10.03 after making a grand entrance at the track meet in a race dubbed SALUTE TO A LEGEND at the Racers Grand Prix at the National Stadium in Kingston on Saturday.

Bolt’s next race will be a 100-meter race at the Ostrava Golden Spike meet on June 28. His final race will come at the IAAF World Championships in London in August.