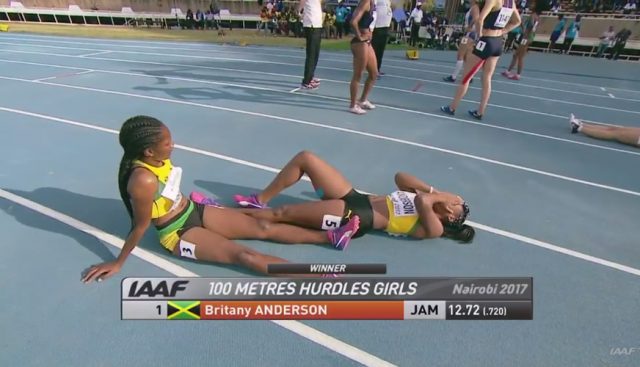 Britany Anderson, a 16-year-old, just ran an impressive race to win the girls’ 100m hurdles gold for Jamaica in a time of 12.72 to upset France’s Cyrena Samba-Mayela, who was second in 12.80 seconds on the final day of the 2017 IAAF World U18 Championships Nairobi, Kenya.

There was a strong tailwind (4.1m/s), which is over the legal-limit of+2.0, so Britany’s time will not be recorded as a championship record or world U18 record, but dear lord that was fast! Jamaica’s Daszay Freeman took the bronze medal in 13.09.

Samba-Mayela, who unleashed her fury, clocked 12.98 in yesterday’s semi-final, clobbered a hurdle mid-race of the final, which could have cost her the title. Anderson was stunned with her victory.