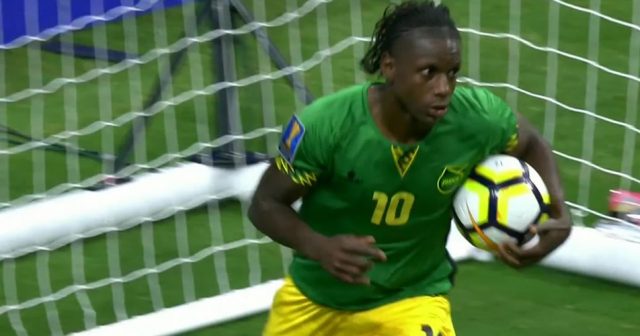 Mattocks, a Portmore native, has now scored 14 goals in total for Jamaica, which makes him Jamaica’ 9th top scorer for his country. He scored to help Jamaica to a 2-0 win vs. Curacao last Sunday.

The Reggae Boyz have advanced to the quarterfinals of the CONCACAF Gold Cup after a 1-1 draw with El Salvador on Sunday which put them on top of group C (for now) with 5 points.

Darren Mattocks shared some strong words speaking to media after the match: “If we play like this, we’re not going to get past the 1/4 finals. It wasn’t good enough.” The Forward added. “We need a reality check because that wasn’t good enough. It was complacency.”

Thanks to a @DarrenMattocks PK goal, Jamaica draws 1-1 with El Salvador in their final group stage game of the @GoldCup. #RCTID pic.twitter.com/5guaGcymp9

Mattocks was selected to Jamaica’s Copa America and CONCACAF Gold Cup rosters in 2015, recording goals in a 2-1 win over the United States in the semifinal and against Mexico in the Gold Cup final. Mattocks is a speedy forward who has spent his entire professional career with Vancouver prior to joining the Timbers in Major League Soccer.