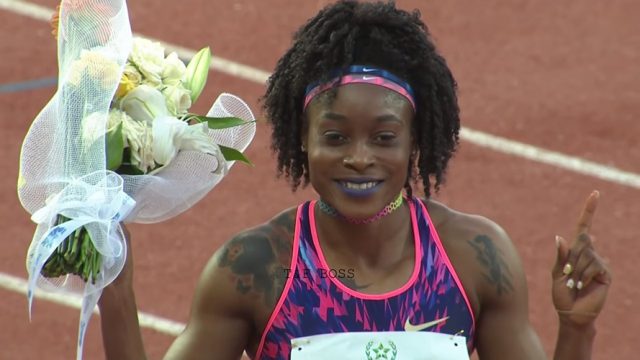 Olympic champion Elaine Thompson displayed class and strength when she sped to an impressive 10.87s (0.3 m/s), setting a new meet record at the Rabat Diamond League in Morocco.

Thompson, who is the overwhelming favourite for the World Championships in London, secured her 14th straight 100m victory ahead of Ta Lou of the Ivory Coast, second in a season’s best of 10.90s.

Michelle-Lee Ahye of Trinidad and Tobago third in 11.02. Blassing Okagbare-Ighoteguonor of Nigeria was fourth in 11.03s. Jamaica’s Jura Levy and Christania Williams were seventh and ninth in 11.18s and 11.28s respectively.

Olympic champion @FastElaine shows her class and takes the 100m victory in a 10.87 MR! Strong from @majo10s70 in second with 10.90#RabatDL pic.twitter.com/DdVKxTAfFU

“I’m pleased with my race. I came here last year and the organisers did a lot of effort for me. My races are going fine, I’m in the shape that I want to be in and I’m looking forward to the London WC,” said Thompson.