I AM A JAMAICAN
Home Sports Jamaica defeats Mexico 1-0 with a 10-man squad, advances to Gold Cup... 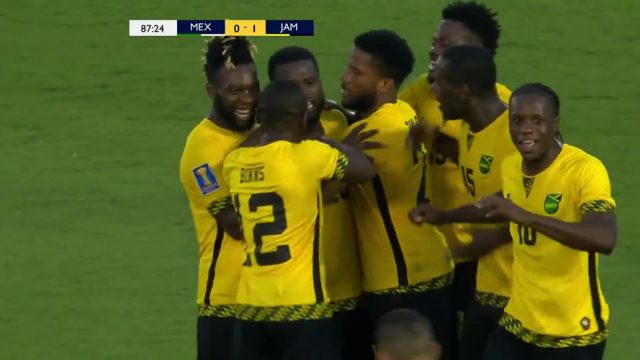 The Reggae Boyz defeated El Tri 1-0 in the semifinal of the Gold Cup on Sunday to book their spot in the final for the second time in history — just two years after Mexico beat Jamaica in the 2015 final. This is the 8th Gold Cup meeting between Mexico and Jamaica.

Kemar Lawrence scored a remarkable free kick in the 88th minute, his third goal for Jamaica, earning Jamaica their first-ever Gold Cup win over mighty Mexico. Jamaica will play the United States on Wednesday, July 26 at the Levi’s Stadium in Santa Clara, California.

The win was Jamaica’s first against Mexico in eight all-time Gold Cup meetings.

GoalKeeper Andre Blake was named Man of the Match after several stellar saves on the occasions when Jamaica’s defense was breached — including this one in the video below. Blake has been the best goalkeeper in this tournament by a safe margin, and on Sunday underlined his credentials for straight-up MVP.

Blake made five saves, some of them jaw-dropping, and showed complete mastery of his penalty box as wave after wave of Mexico attacks crashed on the rocks of the Reggae Boyz back line.

Both teams advanced out of the quarters on Thursday night. Jamaica got a standout performance from goalkeeper Andre Blake to defeat Canada 2-1, while Mexico recorded an early goal and held on to beat Honduras 1-0. This was the second meeting between the countries this tournament after Jamaica held Mexico to a scoreless draw in Denver in the group stage on July 14.

Recap of Jamaica’s matches in this year’s tournament: