I AM A JAMAICAN
Home Sports GOLD: Antonio Watson wins 400m at World U18 Championships 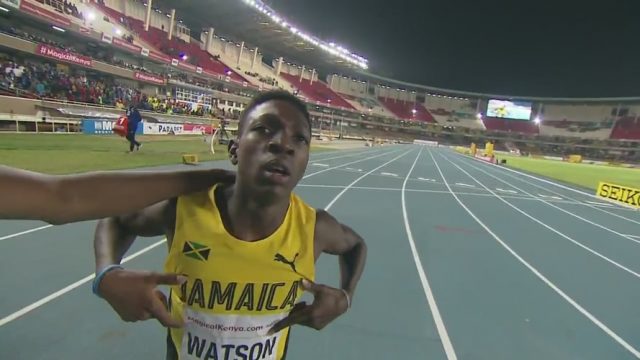 15-year-old Antonio Watson won the gold medal for Jamaica in a thrilling boys’ 400m final on Wednesday evening at the IAAF World U18 Championships Nairobi 2017.

Watson, who came powering through the final 100m of the race to snatch gold in a whopping personal best of 46.59, crossing the line 0.13 ahead of Guyana’s Daniel Williams (46.72). Turks and Caicos’ Colby Jennings third in 46.77 in a blanket finish, with all three of the medallists achieving personal bests.

Jamaica’s Anthony Cox was fourth in 46.77, mere thousands of a second denying him a medal after having led with 50m to run beside eventual sixth-placer Bruno da Silva of Brazil.