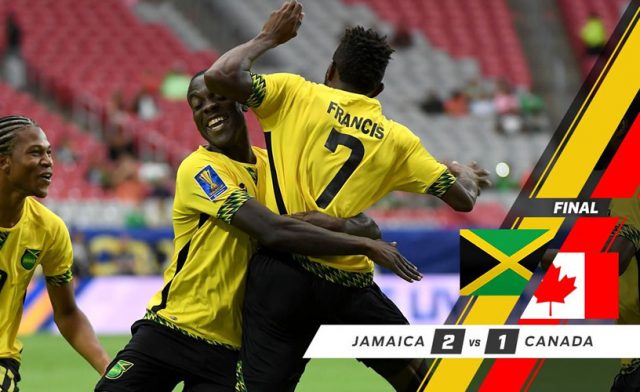 The Reggae Boyz have advanced to their second straight semifinal of the CONCACAF Gold Cup and fourth time in history after defeating Canada 2-1 in their quarterfinal match on Thursday at the University of Phoenix Stadium Glendale, Arizona.

Shaun Francis, assisted by Darren Mattocks, scored the first goal for Jamaica in the 6th minute, his third international football for Jamaica

Then Canada’s David Junior Hoilett, who is born to Jamaican parents, scored in the 60′ to make the score 2-1 to Jamaica.

Andre Blake was named Man of the Match for his brilliant performance, saving Jamaica multiple times.

Jamaica will play the winner of the Mexico and Honduras game (under way) in the semi-finals of the CONCACAF Gold Cup. This game will be played on Sunday, July 23rd at the Rose Bowl in Pasadena, California.