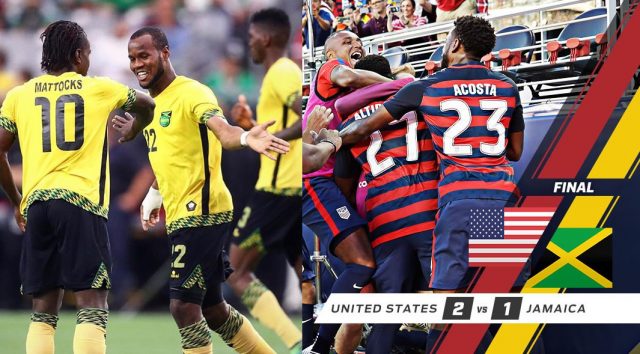 Jamaica ended their Gold Cup campaign as Runners-up for the second time in Gold Cup history after the USA defeated The Reggae Boyz 2-1 to become the 2017 champions at Levi’s Stadium on Wednesday night.

The Reggae Boyz fell short once again of becoming the first Caribbean side to lift the trophy, also falling to Mexico in the 2015 decider, 3-1. However, Team Jamaica is the first and only Caribbean team to qualify for a two consecutive Gold Cup Finals.

Jamaica suffered a devastating loss when Andre Blake — the tournament’s top goalkeeper — was forced from the match with an injured right hand and was replaced by Dwayne Miller, who hadn’t played a minute in the tournament. However, Miller was magnificent in Blake’s place, parrying away American Jordan Morris’ 18-yard attempt in the 73rd minute and swatting teammate Clint Dempsey’s header off the left post in the 75th minute.

American Jordan Morris returned to score in the 88th minute, lifting the United States to a 2-1 victory over Jamaica in 2017 CONCACAF Gold Cup final,

Je-Vaughn Watson scored for Jamaica against the USA in their second consecutive Gold Cup Final in the 48th minute.

Lead scorer Jozy Altidore gave the Americans the 1-0 lead on the stroke of half time in the 45th minute.

In the 87 minute, Je-Vaughn Watson, assisted by Owayne Gordon, tried to help Jamaica take the lead but missed a header from the centre of the box to the left of goal.